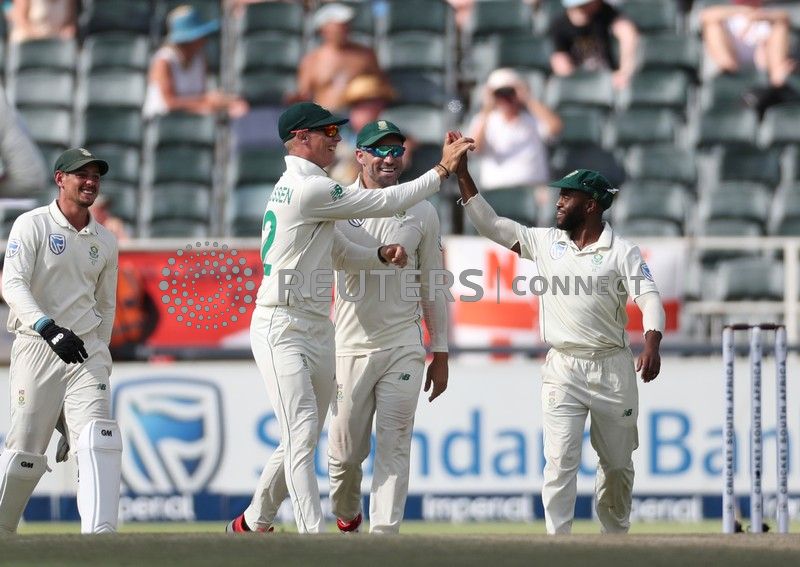 JOHANNESBURG (Reuters) – South Africa have to get a world record target with the bat to tie the test series against England but coach Mark Boucher suggested on Sunday that the near impossible was worth chasing.

South Africa must score 466 runs over the last two days to win the fourth test at The Wanderers — 48 runs more than West Indies’ record successful fourth innings chase against Australia in 2003.

“If you look at the amount of time we have in the game, then we’ve still got to go for the win. If we bat for two days, the run rate is still very gettable,” Boucher said after another tough day for his team in a series where they have been largely outplayed by the visitors.

England scored 400 in their first innings and 248 in their second, being bowled out just before stumps on Sunday.

South Africa managed a miserly 183 in their first innings and have not gone beyond 284 in their seven innings at the crease so far in the four-test series.

“It’s quite a few runs to chase down, it’s never been done before but we have to hang onto some sort of positivity regarding tomorrow,” added Boucher, who took over just days before the start of the series in mid-December.

“Quite a few of our batters are due (a high score) too. It’s going to be tough but we’ll give it a go.”

However, South Africa face not only a five-man English seam attack, who got up some real speed in the first innings, but also a deteriorating wicket with increasingly uneven bounce.

On top of that, the home team’s batting over the last two tests has been poor.

“The confidence has been a bit low so we’ve got to keep talking positive. We’ve got to get the guys’ confidence levels up and that’s exactly what we’ve been trying to do,” said Boucher.

“It’s been tough on the players but this is what test cricket is all about. It’s about stepping up when required.

“The guys are trying. I know it’s been a tough and dark period for us over the last couple of weeks but the efforts are still there. I thought in the field today the guys tried really hard and we’ll keep doing it,” he added.

“We’ve got the attitude in the change room that we want to try and get back to where we should be. We understand it involves a lot of hard work but that’s what we are prepared to do.”.