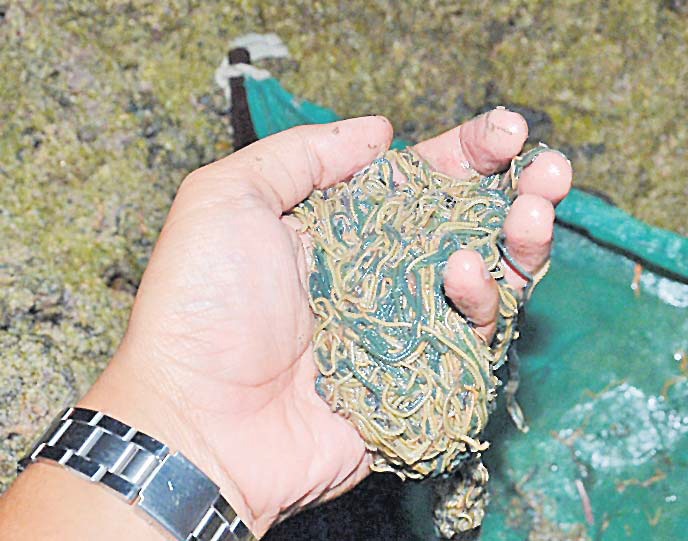 October in the Fijian calendar is called balolo lailai.

It is the month in which the edible annelid sea worms rise from the reefs marking the tenth month of the year.

Today in history in 1957, The Fiji Times published an article about this edible sea worms rising in Yasawa and being collected.

According to the article a Captain Trevor-Withers had reported the balolo rising at Yasawa and was still being collected the following day.

He reported that while cruising up the Western reefs of the Yasawa Group on Tuesday morning in perfect weather the motor yacht Blue Lagoon passed through many patches of floating scum. This partially confirmed the forecast of the Yasawa Fijians that the balolo lailai rise would occur soon.

Captain Withers added that the rise normally started early in the morning but balolo were observed and collected by him and his crew as early as nine o’clock at night. The article described that the early rises were accompanied by a rise of thicker yellow worms one-eighth of an inch thick and eight inches long.

The balolo continued to rise throughout the night and were still being collected off reefs near Nacula.

Captain Withers reported that balolo fritters were available as a breakfast delicacy to the overseas passengers on board the Blue Lagoon who thoroughly enjoyed the novelty.

Reference to the balolo in Mr R.A Derrick’s book “The Fiji Islands” stated that it is an annelid sea worm (Palolo Viridia) which lived in large numbers in crevices or holes in the faces of the sea reefs, usually near passages.

“It rises to the surface with uncanny punctuality twice in each year, generally in October and November, but sometimes (being dependent upon a certain conjunction of moon and light and tide) a week or two later, in the months of November and December,” Mr Derrick explained in his book.

“The Fijians in common with other Pacific islanders have long been aware of the balolo cycle, and of the places where it rises; and on the appointed days which the old men are able to forecast with accuracy, they are early on scene paddling about in their canoes, before daylight, and waiting for the first signs of the rising.

“With the growing light of number (of balolo) increase greatly, until the water seems a dense wriggling mass of them.

“Shoals of fish are attracted to the place, the smaller kinds feeding on the balolo and being themselves pursued and seized by larger fish.

“In a short time the worms discharge their eggs and fluid, which mingles in the water; and the biological purpose of the event, is fulfilled.

“When cooked in the Fiji fashion, balolo is said to have a state not unlike that of whitebait.

“In European households it is usually made into a prepared dish, done in a batter of flour and milk, to which it imparts a greenish hue and a pleasing flavour of the sea.”

The balolo is expected to rise anytime now at other various parts of Fiji.