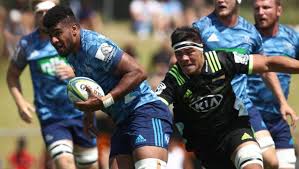 Hoskin Sotutu on attack for the Auckland Blues. Picture: STUFF.

MARK the name Sotutu. RugbyPass reported Hoskins Sotutu could have been another immensely innately talented rugby player who shone like a star then fizzled out as soon as he hit the big leagues.

He is following the footsteps of his dad, a former national representative of the Flying Fijians and was part of the 1999 Rugby World Cup team and inside center Waisake Sotutu Blues coach Leon MacDonald told stuff.co.nz before their last month’s Super Rugby game against the Chiefs they were rewarding Hoskins for being outstanding in the pre-season.

The Blues team made a tough call last week as they dropped Akira Ioane, who MacDonald said was “unlucky” not to continue his run of starts for the franchise as No. 8 He said it became one of a number of tight calls the coaching staff mulled carefully.

“He’s trained really well, is fit and hungry … but Hoskins has been one of our standouts as well. RugbyPass further reported the world has seen it plenty of times before: a player with all the skills needed to be a professional falls by the wayside because they’re missing the right attitude. Sotutu said last year he was basically just training the whole time.

“As a person, I’m quite relaxed. At training, sometimes I might not look engaged,” the 20-year-old Sotutu said.

“The coaches just said that if I’m not playing, they’ve gotta pick me off the way I train and if I don’t look engaged and it doesn’t seem like I’m working hard, they won’t pick me.

“This year, I tried to change it.”