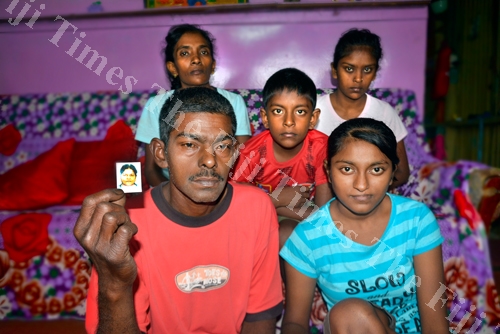 Abhay Chand with his family mourns the death of his mother who passed away in a car accident in Waimalika Nadi on Sunday night. Picture: REINAL CHAND

WHEN Abhay Ram received a call from his mother about 10pm on Sunday, he did not imagine it would be the last time he would speak to her. Bhan Mati, 68, was one of two fatalities of a road accident at Waimalika, Nadi, on Sunday night.

Three people, including a seven-year-old boy, were also injured during the tragedy.

It is believed the car Ms Mati was travelling in veered on to the opposing lane and collided with an oncoming bus.

“She had left for Suva in the morning and I remember that she called and asked me to pick her up when she arrived,” the 43-year-old said.

Mr Ram said he was still coming to terms with the sudden death of his mother.

“We haven’t received anything yet regarding the investigation but we will await the results of the post-mortem examination.”

He said it was difficult losing his mother because he had already lost his father and two brothers.

He added her death was difficult to accept and they would miss her a lot.

Funeral arrangements are expected to be made soon.