Some 30 migrants rescued, one dead as dinghy capsizes in Channel 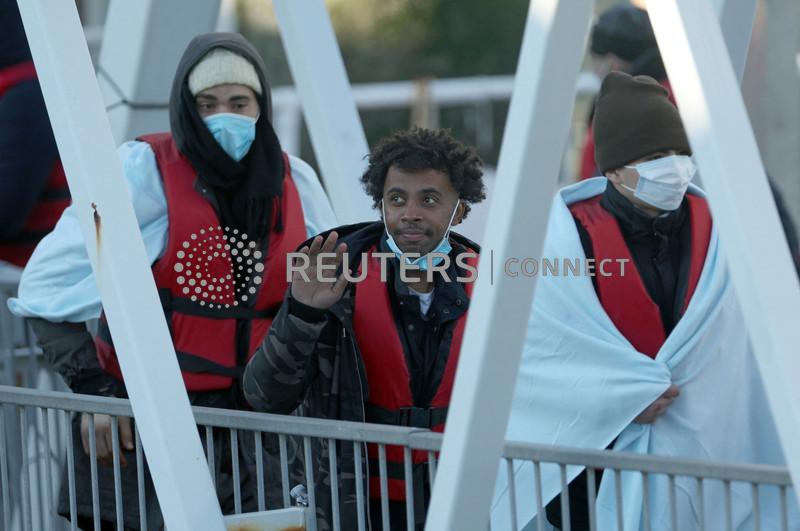 Migrants are escorted into the Port of Dover by Border Force official after being rescued while crossing the English Channel, in Dover, Britain, January 14, 2022. REUTERS/Hannah McKay

BERCK-SUR-MER, France (Reuters) – Some 30 migrants whose dinghy capsized in the English channel as they tried to reach Britain were rescued on Friday, while one man who was on board died, French authorities said.

A coast guard vessel reached the dinghy, which had set off from a beach near Calais, northern France, in the middle of the night, and was able to rescue most of those on board.

But one of the migrants, a young man from Sudan, was dead in the water, according to local Deputy Prefect Frederic Sampson. The man died from hypothermia, amid temperatures between -1 and -3 degrees Celsius on the open sea.

Once brought back to shore by rescuers, the survivors – some of whom wore flip flops and carried their belongings in plastic trash bags – boarded a large white coach to be sent to temporary housing in the region. They were flanked by police.

The Channel is one of the world’s busiest shipping lanes and currents are strong. Human traffickers typically overload the dinghies, leaving them barely afloat and at the mercy of waves as they try to reach British shores.

In November, 27 migrants died https://www.reuters.com/world/five-migrants-drown-crossing-channel-france-britain-bfm-tv-2021-11-24 in what was the worst disaster on record involving migrants in the narrow seaway, sparking a rift between London and Paris over who bore responsibility.

The number of people who capsized in the Calais region more than tripled last year, according to the French Immigration and Integration Office, which said that French authorities rescued 1,002 people in 2021.

British media earlier this month reported that, according to figures from the UK Interior Ministry, over 28,000 migrants made it to Britain by crossing the English channel in small boats.

In a makeshift camp in Dunkirk, near Calais, where families have pitched their tents along an old train line, the danger was not putting people off making the trip.