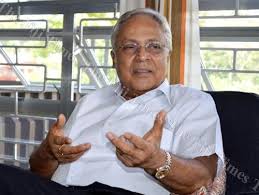 THE answer to Fiji’s taxi industry woes is deregulation, not handing out more permits, says Fiji Labour Party leader and former prime minister Mahendra Chaudhry. He made the comment in relation to the decision by the Land Transport Authority to roll out 1557 new taxi permits for Lautoka and Nadi.

Mr Chaudhry said deregulation would bring illegal transport operators into the formal sector. “Adding 1557 new permits is not going to kill the pirate taxi industry, they will still be there,” he said.

According to an article in Forbes magazine (26/1/17), a study conducted on the impact of Uber, a private taxi business in the US taxi industry, revealed interesting results.

Author, Carl Benedikt Frey, from Oxford Martin School, said analysis revealed that “the impact was muted”. He said while Uber resulted in a fall in income of about 10 per cent among metered drivers, “it resulted in a 50 per cent rise in the number of self-employed drivers in a city”.