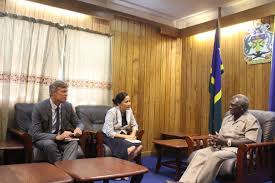 Speaking during a courtesy visit made by FFA’s Director-General to the Office of the Prime Minister and Cabinet on Friday prime minister stated that FFA has contributed a lot to the well- being of the country’s fisheries sector and reaffirmed the Government’s commitment to work closely with the agency.

According to the Director General Dr Manu-Tupou-Roosen, Solomon Islands is leading the way in the management of longline fisheries and in particular with implementation of the Longline Vessel Day Scheme and the use of electronic monitoring.

PM was also briefed about the approved Regional Longline Strategy which will set out a range of objectives and associated actions for improving management of regional longline fisheries.

“This includes establishing zone-based limits to apply within EEZs and tightening up the management of longline fishing on the high seas where there are less stringent measures in place to manage and monitor fishing activity,” said Dr Tupou Roosen.

Dr Tupou Roosen also stated that in relation to offshore fisheries, climate change will affect both the location and distribution of tuna with predicted migration from west to east.

In response the prime minister stated that Solomon Islands will continue to work closely with FFA to address the issue of climate change in relation to offshore fisheries and further acknowledging the effects that climate change will have on the catch and revenue of tuna for countries like Papua New Guinea and Solomon Islands.

Sogavare also acknowledged the new crew welfare licensing conditions as an important step taken by FFA members and that it sends a signal to the rest of the world that violations of the rights of the crew will not be tolerated in the region.

Other issues discussed between the Director- General and Sogavare includes the outcomes of discussions from the recent Regional Fisheries Ministers Meeting and the FFA’s 40th Anniversary.

The prime minister also took the opportunity to convey his gratitude for the steadfast and long-standing support of the FFA.