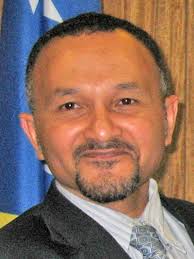 Leader of the Opposition group in Solomon Islands Matthew Wale says the new cabinet line-up reflects the usual and more of the same from the government in the last Parliament. Picture: NATIONAL PARLIAMENT OF SOLOMON IS

HONIARA, 02 MAY 2019 (ISLAND SUN) – The leader of the Opposition group in Solomon Islands, Matthew Wale says the new cabinet line-up reflects the usual and more of the same from the government in the last Parliament.

While congratulating the newly appointed ministers in the new Sogavare-led regime, the Opposition Leader expressed concerns that the cabinet line-up betrays the “business as usual” approach the Prime Minister has adopted.

“Whilst it is, perhaps, not surprising that the Prime Minister will stick to his trusted supporters in his portfolio allocations, it is highly regrettable that the PM is insensitive to the clear and loud cry of the people for change,” the Opposition Leader stated.

The Opposition Leader said the appointments of Bradley Tovosia to the Mines portfolio and Chris Laore to the Home Affairs portfolio as betraying the fact that these appointments are driven by personal and vested interests, and not national interest.

He said a recent Court of Appeal ruling against Tovosia was clear that he abused his powers as Minister of Mines in his erratic decision making.

The Prime Minister is aware of this court ruling but has made a deliberate choice to ignore it when appointing Tovosia to the Mines portfolio.

“This cannot be good for the mining sector, nor is it good for governance in Solomon Islands,” he adds.

The Opposition Leader said the appointment of Laore as following a pattern of bad governance over the past nine years.

He said the Home Affairs ministry is responsible for the Gaming and Lotteries Commission. Wale said Laore is a close follower of Namson Tran, and it is clear why he is appointed to the Home Affairs portfolio, “to protect   Tran’s casino interests”.

The Opposition leader said the people of Solomon Islands are being disrespected in these appointments.

“The Prime Minister is sending a clear signal to Solomon Islands in these appointments, that he does not care about the people’s expressed desire for real change.

“It is clear that the PM is more interested in protecting the vested interests that supported him into the highest political office in the country.

“Where is the national interest in these appointments?” Wale questioned.