Solomon Islands DPP to retire after 28 years of service 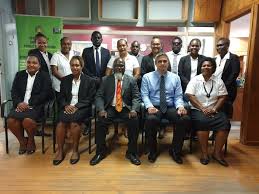 HONIARA, 31 MAY 2019 (SOLOMON STAR) – Solomon Islands Director of Public Prosecutions (DPP) Ronald Bei Talasasa is now ready to hand over the baton after serving the office for almost 29 years.

The flamboyant and hardworking director told the Solomon Star that after almost 13 years as DPP, he now decides to hand the baton over.

“I have served as a prosecutor all my professional life,” Talasasa said.

“There are others who can fill in my shoes, identify them and give them the opportunity to serve,” he said.

Talasasa was appointed DPP in July 2006.

He would have served as DPP for 13 years by July of this year.

But altogether Talasasa has served in the office of the DPP for 29 years and 6 months.

“However, one year was spent on work attachment at the Public Prosecutor’s office in Port Moresby, so effectively in Solomon Islands would have been 28 years and 6 months,” Talasasa added.

He said the highlight of his career was in 2009, when he was recognised by the International Association of Prosecutors (IAP) for his bravery during the tension era in keeping the office of the DPP remaining open and for persecuting without fear or favour.

The IAP presented him with a special award for bravery at the IAP annual conference at Kiev, Ukraine, Eastern Europe.

“I always believe that prosecutions is not for the faint hearted.  “It is for the strong and the brave.

“And to be able to do this number of years is a huge achievement. “I have never regretted responding to this call,” he said.

It has been an onerous call though I thank my parents, my brothers and sisters together with my wife, children and grandchildren for their support during my term in office.

“I do not forget the churches that offer continual prayer support,” he said.

He added that the Government of Solomon Islands including the Ministries of Justice and Public Service, DFAT together with his staff and the RAMSI Law and Justice Program, now SRF, are highly commended for being the difference.

Talasasa does not sought an extension even though that was available to him under section 129 (2), of the Constitution.