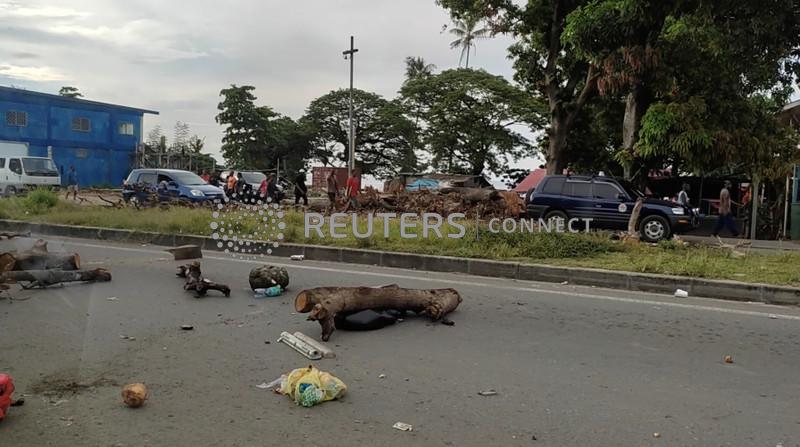 Debris is seen on a highway, after protests against the government in Honiara, Solomon Islands, November 24, 2021, in this screen grab obtained by Reuters from social media video. Georgina Kekea via REUTERS

(Reuters) – Solomon Islanders defied a government-imposed lockdown and protested in the capital for a second day on Thursday, setting fire to buildings in the city’s Chinatown amid an outpouring of disquiet in the Pacific country.

Images shared on social media showed smoke billowing from buildings in Honiara, the capital city, less than halfway into the 36-hour lockdown declared by Prime Minister Manasseh Sogavare, whom protesters have called on to resign.

Honiara’s Chinatown was “beginning to burn again” and was a “long favourite target”, Michael Field, a writer specialising in Pacific affairs, wrote in a tweet.

Media reports did not give an exact reason for the unrest but said people had travelled from Malaita, an island which is separated from Honiara by water, to the capital because of concern about being overlooked by the national government.

The province, which supports the U.S., opposed a 2019 decision to end diplomatic ties with Taiwan and establish formal links with China, resulting in an independence referendum last year which the national government has dismissed as illegitimate.

In an address late on Wednesday, the prime minister condemned the protests – which saw government and police buildings burned, and shops looted – as “another sad and unfortunate event aimed at bringing a democratically elected government down”.

A lockdown in Honiara, which would run until 7 a.m. on Friday, “will allow our law enforcement agencies to fully investigate the perpetrators of today’s events and to prevent further lawless destruction,” Sogavare said.

“We want to make sure that our streets, schools and businesses will reopen soon after the lockdown,” said RSIPF deputy commissioner Juanita Matanga in a statement.

“I am asking for your cooperation until the situation turns normal.”