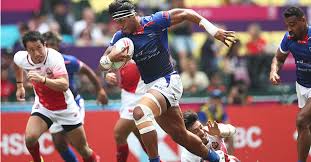 Three players will make their debuts for Manu Samoa on Saturday at Eden Park against the New Zealand Heartland XV. Picture: SAMOA OBSERVER

Tofatuimoana Solia has recovered from the knee injury that kept him out of the Pacific Nations Cup to start at number eight.

“We’ve selected a side which we believe can see opportunities and have the confidence to take them.

“The players know that they can make these decisions with the full support of our coaching staff.

“It’s time to express themselves and enjoy the occasion.”

Solia’s Manu Samoa 7s teammate Melani Matavao is making his own return from injury to start at halfback.

Their inclusion means Ahsee Tuala shifts out to the wing, and there’s no place in the 23 for Belgium Tuatagaloa.

Henry Taefu and Tusi Pisi cover the backs from the bench, with Ulupano Seuteni keeping the starting first five role.

Loosehead prop Logovi’i Mulipola has not been included, with Jordan Lay getting the start and Paul Alo-Emile joining James Lay on the bench.

With loose forward Piula Fa’asalele still out with a broken wrist, returning Manu Josh Tyrell gets a place on the bench over TJ Ioane, Henry Stowers and Pacific Nations Cup star Afaesetiti Amosa.

Vaeluaga said he is expecting plenty of passion and physicality from the Heartland XV:

“Having played in a rural town in Southland – I understand how they feel and how hungry they’ll be to go out on Eden Park and have a crack at beating an international side.

“When those guys put on that black jersey, they’ll represent their country as much as what we will – so it’s going to be a really exciting game.”

Kickoff is at 3pm Samoan time.