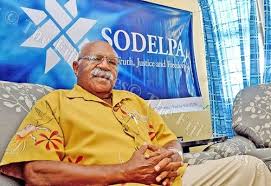 SOCIAL Democratic Liberal Party (SODELPA) has estimated $1.7million to fund their national elections campaign.
Revealing this, party leader Sitiveni Rabuka said the party had almost a year to raise the funds.
“We’re looking at $1.7million for the years that we have running towards the election, we have set that as budget and we will set out the fundraising activities,” Mr Rabuka said.
He said the party’s fundraising committee was working on various plans for fundraising.
Mr Rabuka said the party was also cautious about donations coming in from members of the public, as there were legal limitations on political parties regarding donations.
“We have to note that and keep that in mind as we go and solicit donations from people.
“But in the meantime, we are working out our membership, various categories of membership, noting the limitation on donation from every person,” he said.
Mr Rabuka said the party was also collecting the annual membership of $2 from its members.
He said running campaign for an election was a “costly exercise”.
Mr Rabuka said the party had started to hold exploratory discussions on inter-party cooperation with other political parties, the formation of the candidate selection committee, a manifesto committee as well as groups to carry out fundraising, communication strategies and compliance with the electoral laws, and to the strengthening of the linkage between the party and the parliamentary office.