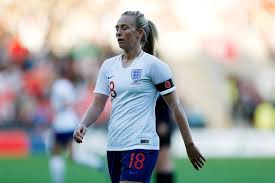 BARCELONA (Reuters) – England women’s forward Toni Duggan says her nation must match the achievements of three-times world champions the United States and “put trophies on the table” before they also ask for equal conditions as the men’s team.

All 28 members of the U.S. 2015 World Cup winning squad have filed a lawsuit against their national federation, complaining about wages and working conditions compared to the men’s side, who failed to qualify for the 2018 World Cup.

“You look at the U.S. team and they’re a lot more successful than the men’s and that’s their argument. So first and foremost England need to be more successful,” Duggan told Reuters in an interview at Barcelona’s training ground.

“I can’t sit here and say we’re going to get to that stage, we need to be putting trophies on the table. Hopefully one day we’ll be like that, but fair play to the U.S. team because it (equal pay) is what they deserve.”

Duggan was part of the England side which reached the World Cup semi-finals in 2015 and the last four of the 2017 European Championships.

After the Lionesses piped the U.S. to win the four-nation SheBelieves Cup in March, she challenged the team to take the next step and go all the way in this year’s World Cup in France.

“I believe we can, we’ve got to two semi-finals at major tournaments, we’ve beat all the tough opponents. So it’s possible but it’s OK saying it, it’s about doing it,” Duggan said.

She is also confident her side will be able to continue the feel-good factor Gareth Southgate’s men’s side provided back home with their run to the last four in Russia, which she said began with the women’s excellent 2015 World Cup campaign.

“To be honest, we started it, we had amazing support in Canada and Gareth followed on from that, great credit to him because he got them playing nice soccer and people wanted to be part of supporting England again,” she said.

“There was a dip in the past few years but the buzz is back and I’m sure everyone will be behind us this summer.”

Former Manchester United and Everton player Phil Neville had no experience of the women’s game when he succeeded Mark Sampson as England coach last year but Duggan praised the impact he has had on the team.

“We need people like Phil who have experienced winning trophies to share that experience with us,” she said. “The standards he sets are important to him, everyone’s enjoying life under him and the new style we play, hopefully we can see that in the summer.”

Before the World Cup, Duggan can look forward to a thrilling end to the season with Barcelona, who are involved in a close-run title-tilt with Atletico Madrid and meet Bayern Munich in the Champions League semi-finals.

Barca have missed out on the last-four stage on three occasions and last year were beaten in the quarter-finals by eventual winners Olympique Lyonnais.

“I just felt Lyon had a little more than us. We were a new team but we’re more together now,” Duggan said.

“We’re on a good run, winning games comfortably. Bayern won’t be easy but I believe this is our chance.”

Duggan has already made history with Barca, scoring in a 2-0 win at title rivals Atletico in front of 60,739 people at the Wanda Metropolitano stadium which smashed the world attendance record for a women’s game.

More than 20,000 people watched last week’s derby between Real Betis and Sevilla, while 48,000 went to Athletic Bilbao’s San Mames to see their women’s side take on Atletico Madrid in January.

“I’ve played in big games, at Wembley, a World Cup semi-final, but the atmosphere with 60,000 people was amazing,” Duggan added.

“In Spain they’re doing something right because the attendances keep creeping up and teams are getting the opportunity to play at the men’s stadiums.

“That’s the way forward for this women’s game and you see it spreading across the world with Juventus doing it. It was a great occasion and hopefully we can keep the ball rolling.”