Snipers, starvation and death: IS ‘caliphate’ ended in bloodbath 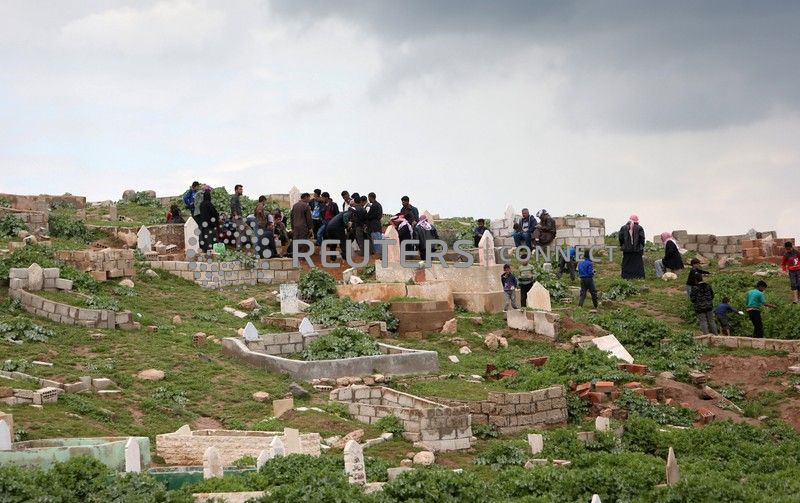 AL-HOL CAMP, Syria (Reuters) – Even when U.S. coalition air strikes and artillery paused for people to evacuate during lulls in fighting, the killing did not stop in Islamic State’s final enclave.

Snipers in areas controlled by Syria’s government near the village of Baghouz picked off women and children fetching water from the river or climbing the small hill to seek medical help in Kurdish-controlled territory, survivors said.

People died from their wounds and children starved.

“There were lines of bodies, men, women and children. I didn’t count them,” said Katrin Aleksandr, a Ukrainian woman who left Baghouz in eastern Syria in the last days of the fighting.

She lay in a hospital bed with her head stitched up, two black eyes and shrapnel wounds to her limbs. Her husband, a militant, was killed in the air strike that wounded her.

“Everything was on fire, including tents people lived in,” she said.

Those who lived through the final days of Islamic State’s self-declared caliphate said many people had stayed or were trapped in trenches, tunnels and tents in Baghouz.

Aleksandr and several other people interviewed by Reuters in camps and hospitals, including supporters and critics of Islamic State, gave separate but similar accounts.

They say bombardment by U.S.-backed forces and sniper fire from Syrian government areas killed scores, if not hundreds, as fighters and families scrabbled over food.

U.S.-backed forces declared last month the full territorial defeat of Islamic State in Iraq and Syria. Asked about events in Baghouz, the U.S.-led coalition said it uses “stringent methods to … allow halts to strikes if any civilians would be put in danger,” and investigates all reports of civilian casualties.

Islamic State deployed car bombs and suicide belts during weeks of fighting for Baghouz. The Sunni Islamist group left a trail of destruction, killed thousands of people in the name of its narrow interpretation of Islam and helped cause many more deaths by trapping civilians in battles to drive it out.

But its adversaries have often used intense bombardment to end those battles in which civilians were killed, fuelling a humanitarian crisis and resentment among those who once lived in the areas it controlled.

In Mosul, the group’s Iraqi stronghold from 2014 to 2017, aerial and ground bombardment destroyed its centre and killed thousands of civilians, according to rights groups.

Raqqa in northern Syria, where IS planned attacks in European capitals, was largely destroyed in 2017 before some militants were allowed to evacuate. Many of them are thought to have ended up in Baghouz.

IS supporters, those who tolerated the group and even some critics say its defeat has come at too high a cost in lives and destruction, creating anger the militants are likely to try to exploit as they wage a growing insurgency.

“There’s no shelter in Baghouz, just trenches and tents. Shells landed every 20 minutes. I left after an explosion killed my husband and two of my children,” said Salma Ibrahim, a 20-year-old Moroccan IS supporter at al-Hol camp where many displaced by violence now live.

“Of people who went to the river to get water, maybe half returned,” she said.

Baghouz, now under the control of the Kurdish-led and U.S.-backed Syrian Democratic Forces (SDF), is separated by the Euphrates river from territory controlled by the Syrian army and its allies including Iraqi Shi’ite Muslim militias, who have been accused of revenge attacks against Sunnis.

With IS no longer holding any of eastern Syria, the Euphrates effectively demarcates rival areas of Kurdish control to its east and Syrian government control to the west.

Reporters have mostly been prevented from reaching Baghouz since the battle entered its final phase and ended in late March.

Some civilians said IS forced them to stay almost until the end.

She said militants and families fought over bags of flour and scraps of meat.

“They would point their guns at each other and wrestle over flour. People starved,” she said. “When we finally left, we saw bodies of children missing limbs and heads.”

The U.S.-led coalition said it carried out 193 air and artillery strikes in Syria between March 10 and IS’s declared defeat on March 23, some resulting in secondary explosions. It said the SDF were “committed to enabling multiple opportunities to allow for civilians to escape harm.”

Militants kept civilians next to ammunition depots and hid in a network of tunnels, several people interviewed said.

An SDF fighter who participated in the battle said dozens of comrades were killed by mines planted by IS.

“The smell of burned bodies and explosives mixed when we entered Baghouz,” said the fighter, Chegovara Zerik. “Air strikes helped destroy tunnels. Without them we wouldn’t have been able to advance.”

“Most of the bodies were men and women fighters. Strikes only hit where gunfire was coming from. It was not a normal battle – women and boys also fought,” the fighter said.

Unverified videos posted on social media purported to show IS women fighting. Those interviewed said this might have happened but they did not witness it.

Many women described cowering in trenches.

“The reason most people did not leave is because everyone was scared,” said one British woman at al-Hol, who struggled to speak because of a mouth injury.

That included fear of revenge attacks, she said.

“One German girl, she got caught, then they (the SDF) were, like, “Why did you come?” and shot her in the head.”

The 22-year-old Londoner declined to give her name. Reuters could not verify her account.

The SDF said it was “impossible” any such incidents occurred among its ranks.