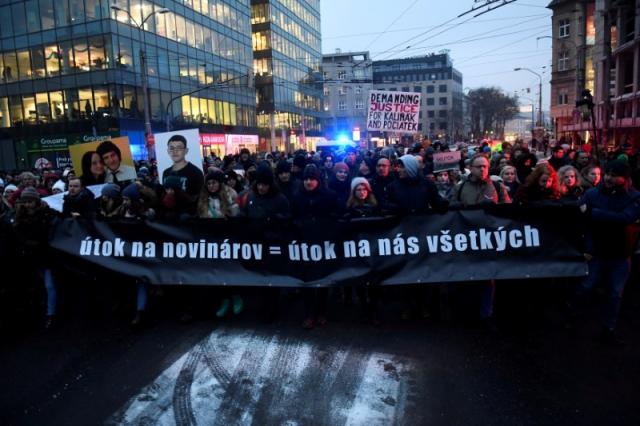 FILE PHOTO: Participants hold a banner reading: "Attack on journalists = attack on all of us" as they march in honour of murdered Slovak investigative reporter Jan Kuciak and his girlfriend Martina Kusnirova in Bratislava, Slovakia, March 2, 2018. REUTERS/Radovan Stoklasa/File Photo

BRATISLAVA (Reuters) – Farmers drove dozens of tractors from central and eastern Slovakia to Bratislava on Wednesday to protest against agricultural subsidy fraud, brought into the spotlight by a murdered reporter in his last story.

The farmers said the government and the ruling leftist Smer party, in power for most of the past decade, have for years overlooked a system that enabled politically connected people to claim subsidies on land they did not own nor had any other title to.

Slovakia’s government at its Wednesday session agreed to set up a special task force to investigate subsidy fraud allegations.

The General Prosecutor’s office said this week it had looked into 35 cases related to the farmers’ complaints. It did not say when its results would be made public.

Small farmers say they face violence or blackmail by local thugs trying to force them off their land or collect the subsidies while the police look away.

According to Slovak law, anyone who farms on the land but does not necessarily own it is entitled to claim subsidies for each hectare, funded by the European Union.

Farmers allege that people illegally claim subsidies; that they fail to deliver any documentation proving they use the land, or provide fake papers; and have contacts in public administration.

“It is unacceptable that small farmers are not able to live off the land they own (…) because of speculative claims for subsidies,” farmer Frantisek Oravec told reporters after meeting with President Andrej Kiska on Wednesday.

Kiska, a ceremonial rather than a political leader, sided with the farmers.

“We need to restore the rule of law in the Slovak countryside and clear land ownership rights because the current system creates conditions for fraud,” Kiska said.

Mass rallies against corruption and lack of progress in the investigation of investigative reporter Jan Kuciak’s murder were due to take place in several Slovak towns on Friday.

Kuciak brought attention to Italian businessmen in Slovakia with suspected mafia links, including Antonino Vadala, who had business ties with two people who went on to work at former prime minister Robert Fico’s office. Both have resigned and denied any wrongdoing.

Vadala has been charged with agricultural subsidy fraud in Slovakia but he was extradited to Italy over an unrelated drug trafficking charge in May. The Slovak case has been pending in his absence.

Kuciak, who also covered a number of other topics, was found shot dead at home with his fiancee in late February. The murder has shaken Slovakia, prompting mass protests that forced the resignations of the prime minister, two interior ministers and a police chief.

No one has been charged over the deaths, which the prosecutor overseeing the case said was likely a contract killing.

Slovak reporters have followed up on Kuciak’s story and reported alleged cases of subsidy fraud schemes by Slovak business people including a former lawmaker of the Smer party. There have been no charges yet. The Smer party suspended the membership of the accused lawmaker, who has denied any wrongdoing.