‘Sleeping bear’ Russia only needs to be shaken awake 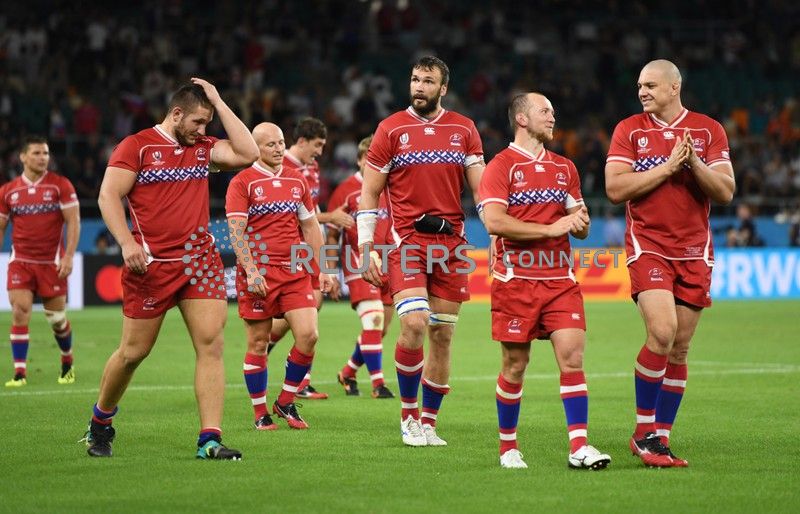 HAMAMATSU, Japan (Reuters) – Russia’s progress in four games at the World Cup in Japan has coach Lyn Jones confident the side can grow and be even better if they qualify for the next tournament in France.

Russia, who had been to one previous World Cup in New Zealand in 2011, only qualified for the global showpiece in Japan because Romania, Belgium and Spain were all docked points for fielding ineligible players in qualifying.

The side, led by inspirational captain Vasily Artemyev, however, played to their strengths of a strong and combative pack and booming right foot of flyhalf Ramil Gaisin, and proved difficult to break down in all four of their games in Japan.

They were beaten by Japan 30-10 in the tournament opener before losing to Samoa 34-9 and then held scoreless against Ireland (35-0) in their first three games.

Fatigue ultimately caught up with them in their final game on Wednesday at Shizuoka Stadium where a patient Scotland, needing to win and preferably win with a bonus point to keep their own hopes alive, ran in nine tries for a 61-0 victory.

While Jones quipped afterwards that tier one sides were not on a different level but playing a different sport, he said he expected the experiences of the tournament would provide a massive boost to the side’s development.

“It’s a sleeping bear,” he said. “We just need to shake it awake and watch the potential that comes from this tournament.

While Russia were competitive in the basics of the game, what Jones called “the ABCs” — a solid set piece, strong kicking and good defence — they were limited on attack.

There was little appreciation of space and how to create or manipulate it, while Gaisin’s instinct was to kick, no matter what was in front of him.

One such occasion against Ireland he had a three-on-one overlap inside his own half and chose to kick the ball deep rather than try to free up his outside players.

Developing attacking instincts would be the team’s next task, Jones said.

While the majority of the squad play in Russia’s professional club competition, it was also clear the pace of the international game at the top level was too fast for them and they drifted in and out of their matches.

Artemyev, who spent several years in Ireland as a student, felt there were benefits to other Russians following his developmental path, although the national union was also working hard to build domestic pathways.

“We are quite isolated in Russia. It’s difficult to get exposure when you’re a young talented Russian player so the clubs abroad can look at you and see you play,” Russia’s captain said.

“Hopefully this tournament will help with that.”