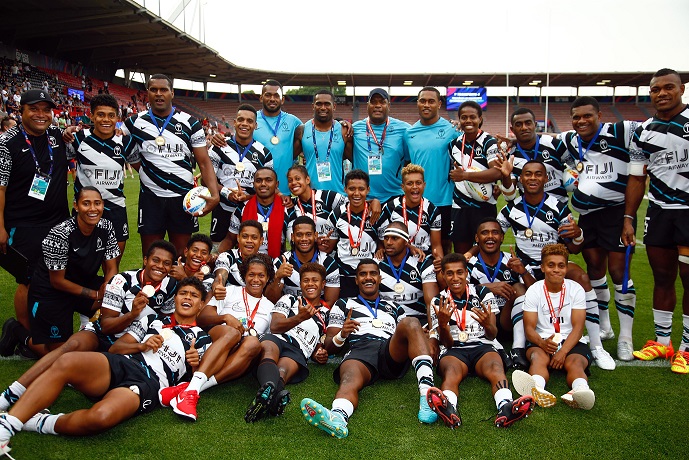 The Ben Gollings-coached side overhauled first time finalists Ireland with a “come-from-behind” 29-17 win to claim the men’s title.

Victorious captain of the Fiji Airways Fiji 7s team Tevita Daugunu was happy with the feat achieved by his band of gladiators after the conclusion of an epic final.

“We were told to work as a team in defence and also on attack,” Daugunu said.

“During the halftime break, our coach Ben Gollings reminded us of sticking to the game plan.

“Ben told us to kick the ball in the opposition’s 22-metre and have them pinned inside their own half.

“We worked for each other and did the right things on the field of play against a quality opponent”.

Daugunu added the win was for all Fijians around the globe.

Meanwhile, Waisea Nacuqu scooped the HSBC player of the final award and said that “Ireland was a good team and played well in the final but we worked hard to win.”

The five tries to three romp by the Fiji 7s team puts them in good stead for the eighth round in London next weekend before the grand finale in Los Angeles on 27-28 August.

The Fiji 7s team currently lie on fifth spot with 87 points despite missing out on rounds three and four played in Spain due to the effects of a killer virus while Argentina, which finished fifth at Toulouse lead the points standings with 118 points and long time table leaders South Africa are second on 116 points with Australia third on 110.