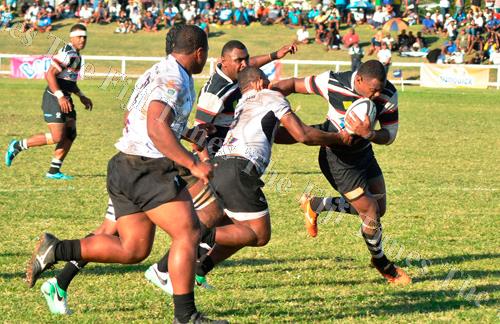 Nadroga players in action during one of their Skipper Cup matches. Picture: FT FILE

FORMER Fiji 7s playmaker Amenoni Nasilasila helped his Nadroga rugby team beat a previously unbeaten Naitasiri side 33-17 in the fourth round of the Skipper Cup competition at Lawaqa Park.

Nasilasila, who played fullback for Nadroga scored his team’s bonus point try in the 67th minute in the second half giving the Stallions another boost before they scored another try in the 75th minute through substitute winger Akariva Nabati.

Nadroga gained 14 points in the first spell with number eight Eremasi Radrodro scoring the first try in the 14th minute and a penalty try followed in the 31st minute for the Stallions taking the lead in the halftime break 14-3.

Momentum gained in the second half as the Stallions extended the score margin from front rower Timoci Sauvoli’s try and another two from Nasilasila and Nabati to seal the win.

Naitasiri scored two tries and a penalty from flyhalf Kini Douglas to secure their 17 points.

Nadroga team president Tiko Matawalu said the boys lived up to the expectations but there were areas that needed to be improved.

“The boys really played well in front of their home crowd and we knew it was going to be a tough match but they performed really well,” said Matawalu.

Naitasiri head coach Dr Ilaitia Tuisese Jr said he had a young side and the match really taught them a lesson but they would regroup and focus on their next match.

“It was a really tough game for them and they learned a good lesson from Nadroga and it’s always tough to play against Nadroga but we learned a lot especially in the forwards and we have a lot to improve before the next match,” said Tuisese Jr.

This was Naitasiri’s first loss in the competition.