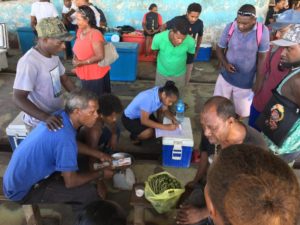 HONIARA, 04 JULY 2018 (PFIP) — Following the successful pilot project last year, the Solomon Islands National Provident Fund (SINPF) has announced a nationwide roll-out of their micro pension account for Solomon Islanders active in the informal economy, who make up 80 per cent of the population.

Officially launched by Deputy Prime Minister and Minister of Finance & Treasury, Manasseh Sogavare last Friday, the new youSave account gives all Solomon Islanders the opportunity to save voluntarily for their retirement.

The majority of the unbanked are women and rural dwellers, who SINPF field teams will reach out to through door-to-door visits. Sign up will also take place at all major centres like market places and retail stores, and focus on agriculture and tourism sectors. Once registered, Solomon Islanders will be able to easily make regular small pension payments through their mobile phone using ANZ’s goMoney platform. ANZ goMoney Merchants will also act as Agents to assist SINPF with collecting member contributions.

To ease the time-consuming and cumbersome manual sign up process, the SINPF will roll out an automated system, which will enable capturing of customer records and their biometric fingerprint using Android-based tablets connected to the internet. At the same time, the new SINPF members will instantly receive their membership card. This system will also provide a solution for many Solomon Islanders who lack the necessary formal IDs.

PFIP’s Financial Inclusion Specialist Isaac Holly said the current informal economy uses informal ways to save, like hiding money under a mattress, but these methods are unsecure and will not be enough for the long-term needs.

“Through the youSave account, Solomon Islanders can make small contributions that will earn them investment returns and give them peace of mind that their money is secure.”

In March 2017, through Australian Government funding, the Pacific Financial Inclusion Programme (PFIP) assisted the SINPF with the roll out of a prototype micro pension product targeting the informal sector.

Using a small sign up booth once a week at the Honiara market and through radio awareness, the product proved very popular and it signed up many new members in a short period of time. This mode however would prove to be too expensive, so PFIP brought onboard ANZ Bank to develop a prototype to test client responses to mobile digital payment interfaces. Using ANZ goMoney, members were able to make small contributions conveniently from anywhere and saved time and money associated with manual payments.

The pilot project came to an end in December 2017 with demand and usage both validated. The project noted that SBD $800,000 (approx. US$102,200) was banked by 1,200 registered members and over 300 transactions each month were done through four ANZs goMoney agents. These results were presented to the Board of SINPF, who approved its roll out nationwide.

This was PFIP’s first project employing an Innovation Lab (Learn, Test, Scale) model where the micro pension product was researched and tested, prior to viability and demand successfully proven. PFIP is exploring opportunities to replicate this model in other Pacific Island Countries.