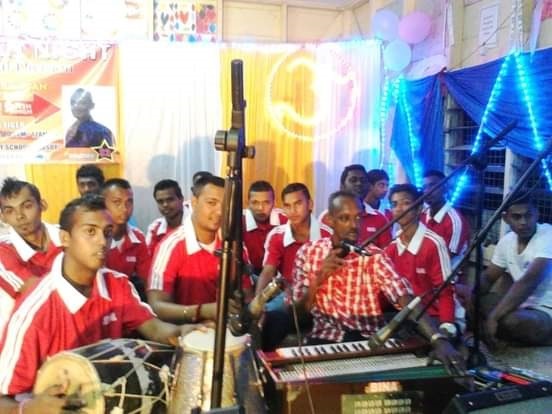 Even as a kid growing up, while others were easily swayed by the popular songs out of ’70s and ’80s Bollywood, nothing quite resonated with him as bhajan.

He said listening to and memorising lyrics of the devotional songs had such a deep impact on him that he set his sights on becoming the first bhajaniya (singer) in his family.

The 53-year-old said attending cultural events during his childhood was a game-changer.

“When I was a little kid, in the ’70s, I used to attend religious functions and seeing people playing instruments and singing devotional music touched me in a way that the popular music of the time didn’t,” the Lakena, Nausori, resident said.

“Every time I attended religious functions, I would watch how the instruments were played and memorise the movements.

“As soon as I returned home, I would collect empty paint containers and tap on them, imagining I was playing a dholak.”

However, Singh’s biggest challenge came from within his own home and the lack of support from his parents made his first forays into music quite difficult.

“They were not very supportive because they wanted me to focus on my studies.

“I couldn’t blame them because they always wanted the best for me and that’s why they pushed me to study hard so I could get a good job in the future.”

He said lack of finance was also a huge challenge. “My parents were not financially well off, so they were not able to support me and that made them restrict me from singing bhajan.

“Bhajan music requires the use of instruments to learn or practise and these are very expensive, so it was hard for me to develop my musical skills at an early age.”

Like many families who were forced to make hard decisions, Singh was relegated to helping the family make ends meet by selling produce at the Nausori Municipal Market.

“Because of my family’s financial constraints, I started accompanying my parents to the Nausori market, where they operated a vegetable stall.

“Little did they know, I was only doing it so I could earn some money to further my bhajan dream.”

Singh said his passion and dedication slowly began to pay off. He acquired the skills he needed and grew with confidence. Sing made his singing debut in 1985.

“At the age of 11, I sang my first bhajan at Koronivia in Nausori.

“I went to an uncle’s place for a family gathering and they urged me to sing one bhajan.

“I was very nervous because before that I had not sung in front of a large number of people, but I knew I had prepared well and had faith in my ability and I succeeded.

“After that, I just went with the flow and it unlocked many doors of opportunities.

“I made so much of an impact that famous bhajan singers challenged me in various competitions.”

Singh said he composed a few bhajans and his first was based on Rama Auttar — a bhajan portraying the birth of the Hindu god, Lord Rama.

“I had a book at home and I learnt about Rama Auttar from it and developed the bhajan all on my own because I had no one to support or teach me.

“Over the years, I have done many stage shows all around Fiji and I believe this talent is my biggest asset.

“As I gained exposure, my fan base also increased and through that, I finally managed to release seven albums.”

Singh said along his journey, he also received numerous awards. “Every event I attend is a learning opportunity for me.”

He said over the years, he had seen many challenges, but the COVID-19 pandemic was undoubtedly one of the biggest ones.

“COVID-19 restrictions stopped all gatherings and functions and I had to stay at home, which was very difficult as I couldn’t go out, socialise and sing bhajan.”

He said bhajan singing was not only a hobby – he sang for fun, to relax and at times to help those in need.

“I am a welder, fabricator and also operate the stall at the Nausori market, which was previously run by my parents.

“I acknowledge the support of my family for always being there to motivate me when I needed them the most.”

He said the introduction of new technologies and Bollywood has had a negative influence on bhajan music.

“Some people try to mix Bollywood styles and that affects the true meaning of bhajan singing.

“However, it is a great and proud moment when we see youths taking an interest in this religious singing.”

Mr Singh encouraged youths to learn Hindi religious music and to stay true to the music in its purest form.

“My advice is to not change the tunes or remix them with the latest songs because it will change the whole meaning of the bhajan.”