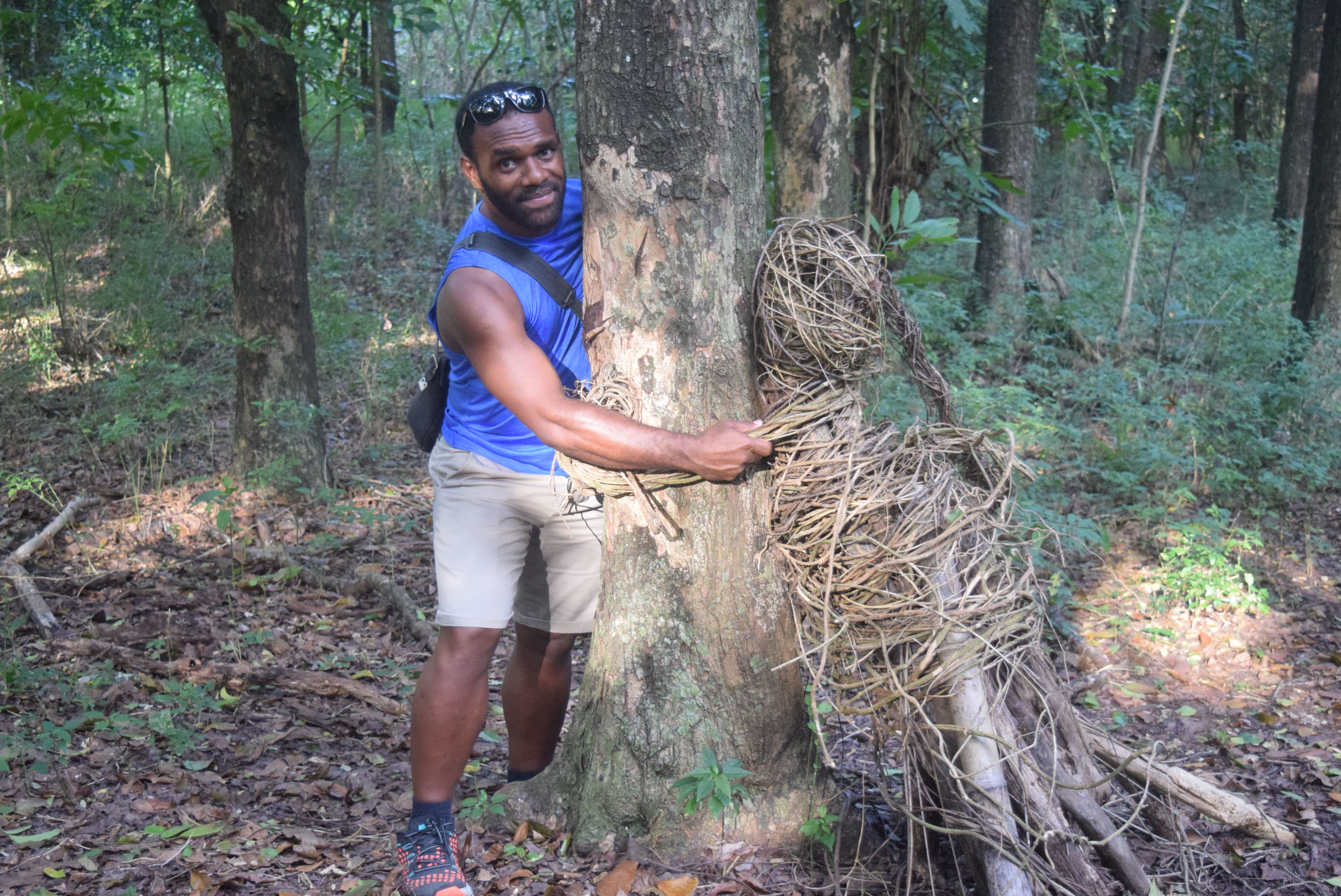 It was on a late Friday afternoon, at the end of my town-hopping trip in the burning west, when a very exhausted version of me decided to make a quick stop at the famous Sigatoka Sand Dunes National Park.

I had ascended these very same dunes and scaled its undulating ridges numerous times before, during my childhood days in nearby Volivoli Village.

I had even walked the stretch of sand from the Sigatoka River mouth to points beyond Naqarai Beach and Yadua Village, on the western end of the park.

Back in the day, especially on Sunday afternoons, my cousins and I would play cowboys in bushes near farmer Havauku’s (meaning wash and wear in the local dialect) peanut field, now a reafforested area within the national park.

But to do it at the prime of my life when my body weight was hitting the late 140s, was tantamount to pre-meditated murder.

It was 3.30pm, meaning I had one hour to do the unimaginable.

Luckily my tour guide, Senior Park Ranger, Ivereimi Rogoira, was someone I knew.

We met back in 2013 while I did a communications research on the plight of women in Sigatoka’s squatter settlements.

It was the right choice! Right from the word go, my worm’s eye view of towering trees, swishing branches and rustling leaves seemed like marvelling at the sky, littered with sparkling emerald stars.

It’s quite amazing how getting close to nature instils the appreciation of the details we so often take for granted, like the radial pattern of a tree fungus, fresh confetti of lantana blooms, a spider’s mid-air tapestry or the cocooned butterfly-to-be on the sheltered side of a leaf.

Everywhere I looked, blotches of green on the majestic dunes reminded me of nature’s grandeur and her silent fight to stay alive in a world gripped by the horrors of climate change and human exploitation.

“Climate change is real and we need to move the discussion beyond the grog bowl to serious action,” Rogoira said.

“People need to re-evaluate their environmental footprints and switch to sensible lifestyles that don’t stress our environment.”

After our first sharp ascension, the Yataga Lookout gave me the brief respite I needed to catch my breath. Gone were Havauku’s horse-ploughed fields and tin shack of the early ’90s.

In their place, a proliferation of grassland sprawled across the hills to adjoin Driodrio Forest, an oasis of endemic trees which locals believe is the gateway to the spirit world.

“Locals believe that when a star falls in Driodrio (dark) forest, a village elder is about to die,” Rogoira said as we approached a signpost, “This is where we’ll turn right to take the short course.”

The long trail, which took two hours to complete, continued toward the massive body of dunes famous for being the training site of our national sevens team and the mighty Nadroga stallions.

Here, as if the dunes are breathing and alive, you get to feel the vibrant nature of this shifting world.

Different shapes and patterns of sand bespeak the powerful and tireless work of agitating winds.

Rogoira spoke about the park’s dry forest and its collection of native and introduced species.

He talked about how he first joined the park in 2008 and continues to love his job, motivated by his natural affinity to nature and awareness of his responsibility as a custodian of the environment.

“My role is to make sure visitors are safe and their experiences at both parks are both enjoyable and memorable,” he said.

The park’s eluvium soil allows plants to grow in the hot and dry wind-beaten dunes, providing the green needed to break the
monotonous spread of sand.

Over the years, fire, overgrazing, sand extraction, farming and cutting of dune forests have been detrimental.

If not curbed could see the destabilisation of the dunes, its spread inland into the community and eventually its loss.

This is why the gully to the left of Yataga Lookout, is slowly being replanted, extending Driodrio’s endemic forest and giving hope for the park’s future, the dune’s overall stability and the survival of many animals that call the dynamic sand environment home.

Planting trees is one of the ways the NTF gets the community involved in the park and learn about the gravity of protecting and conserving the natural environment.

“Tree-planting is a popular activity for us and we are quite excited about it. Tree planting is about saving the dune’s remaining
patch of dry forest and extending its range in the park. So we hope to have more of it in the near future and more community involvement,” Tutani said.

Established in 1970, the national park is looked after by the NTF, a statutory body funded jointly by the Fiji Government, independent donors and multilateral projects to provide for the protection of Fiji’s natural, cultural and national heritage.

In recent years the NTF has taken on the added responsibility of conservation education and raising awareness on some of Fiji’s
disappearing wildlife and cultural values.

On our descent, following a climb that slightly pulled a muscle on my left calf, Rogoira shared his vast knowledge of local medicinal herbs, making him sound like a village grannie turned ranger.

“Vevedu is used for tadoka (viral illness), wa lutu mai lagi (devil’s twine) is taken by pregnant women to allow an easy delivery, vativati (scented fern) is good for coughing, you use lantana if you have diabetes while pandanus aerial roots that have not
reached the ground is medicine for excessive lochia (postpartum bleeding).”

Along the shore, with winds blowing strong on our faces, I stared in amazement at driftwood tepees that lined the beach like a deserted apache village.

“For our second activity visitors are required to collect driftwood and construct beach tepees. This not only encourages team unity and bonding but helps stabilise the sand and prevent beach erosion as well,” Rogoira said.

Tree-hugging was introduced to me during the final leg of our walk, straight after I took a few shots of the park’s colony of flying foxes that hung from the bows of a deciduous tree.

At first, I found the idea of tree-hugging spooky because of what looked like plant-dwelling sloths on mahogany tree trunks.
Visitors use vines and driftwood to make tree huggers, a concept borrowed from south Asia where deforestation caused by excessive cutting of wood, unsustainable development and commercial agriculture have led to the loss of vegetation and arboreal animals.

“Hugging a tree symbolises our deep concern for the forest so as an activity it hopes to demonstrate to park visitors the importance of plant life in maintaining a balance in the ecosystem and the need to protect them.”

In just over an hour, as the sun smoothly made its way down the western horizon, we completed our walkthrough of the park’s three activities.

In an effort to better engage and serve visitors to the park, SSDNP’s VIC will soon undergo refurbishment before focus shifts to the Learning Centre, which will be modelled like a small dune museum showcasing many interesting aspects of the park.

“We are also about to embark on a new business venture that sees a new tour (with sand rovers) being introduced to the park, which will provide visitors with another option for exploring the dunes without too much physical exertion,” Tutani said.

This will be the first time the NTF will be partnering with a company to run such tour, scheduled to start on August 1.

NTF also plans to fence off sensitive areas around the unstable dunes (big dunes) where the Fiji sevens team train.

The reason behind this conservation measure is to reduce sand erosion and encroachment.

Once the areas are fenced, park rangers together with community volunteers will replant the area to help with the dune’s stabilisation.

“This is such a wonderful opportunity to get groups of people together in nature doing conservation work and learning together.”