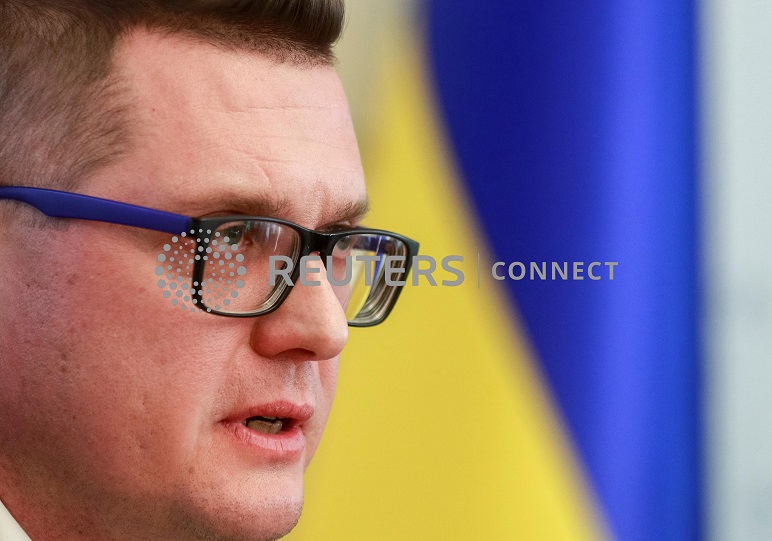 By Tom Balmforth and Max Hunder

KYIV (Reuters) – The sidelining of Ukraine’s domestic spy chief on Sunday laid bare Kyiv’s battle far from the frontlines to purge its powerful security agencies of collaborators and Russian agents.

Zelenskiy singled out the case of Oleh Kulinich, a senior SBU official appointed under Bakanov to focus on Russian-annexed Crimea who was arrested on suspicion of treason on Saturday. He had been sacked shortly after Russia’s Feb. 24 invasion.

In his nightly speech to the nation, Zelenskiy hailed the operation against Kulinich as part of a process of “self-purification”.

He said 651 cases had been opened into suspected treason and collaboration by prosecutors and law enforcement officials, and that more than 60 people from Bakanov’s and Venediktova’s agencies were now working against Kyiv in Russian-occupied Ukraine.

On Bakanov’s exit, Volodymyr Fesenko, a Kyiv-based analyst, said Kulinich’s arrest had probably been the last straw after the war-time flight to Serbia of an SBU general, and suspicions of treason that had swirled around some of his regional chiefs.

“The decision on Bakanov was forced,” he said. “This is a crisis decision. They need to bring in order, to purge the SBU and search for … agents. Not only in the SBU of course, but the SBU is critically important.”

The SBU is the main agency in charge of counter-espionage and domestic security. The sprawling organisation emerged out of the Soviet-era KGB and has been the subject of a reform push in recent years.

An SBU reform bill was drawn up in 2020 to cut its huge number of employees down to size and better define its remit, but the effort had already stalled by the start of Russia’s full-scale invasion in February, constitutional and policy expert Bohdan Bondarenko said.

Bakanov, a security outsider with a background in show business, was appointed to head the SBU in 2019. He was one of an array of new faces who rose to prominence after Zelenskiy, a former comedian, won election earlier that year.

One of the enduring questions of the first phase of the war is why the southern region of Kherson fell to Russia so quickly in contrast with the fierce Ukrainian resistance near Kyiv that forced Moscow to abandon its push for the capital.

“It was obvious there was treason in Kherson region,” said Fesenko.

During a speech to the nation on March 31, Zelenskiy announced the sacking of Serhiy Kryvoruchka, SBU regional head for Kherson, and another SBU general.

“Now I don’t have time to deal with all the traitors. But gradually they will all be punished,” Zelenskiy warned at the time.

Bondarenko said the problem of collaborators and agents had been more acute back in 2014 when Russia annexed the peninsula of Crimea and backed a separatist insurgency in the east.

“Now it’s certainly smaller, but it remains,” he said, giving the example of Kherson region.

Bondarenko said he believed Sunday’s political shakeup was likely intended to demonstrate to the public that Zelenskiy is taking action against the problem of Russian infiltration and that it would help consolidate his power.

“This information about internal checks and defections… looks like a formal grounding to go to the public and say ‘look, there is a problem, and I am trying to solve it this way,'” he said.