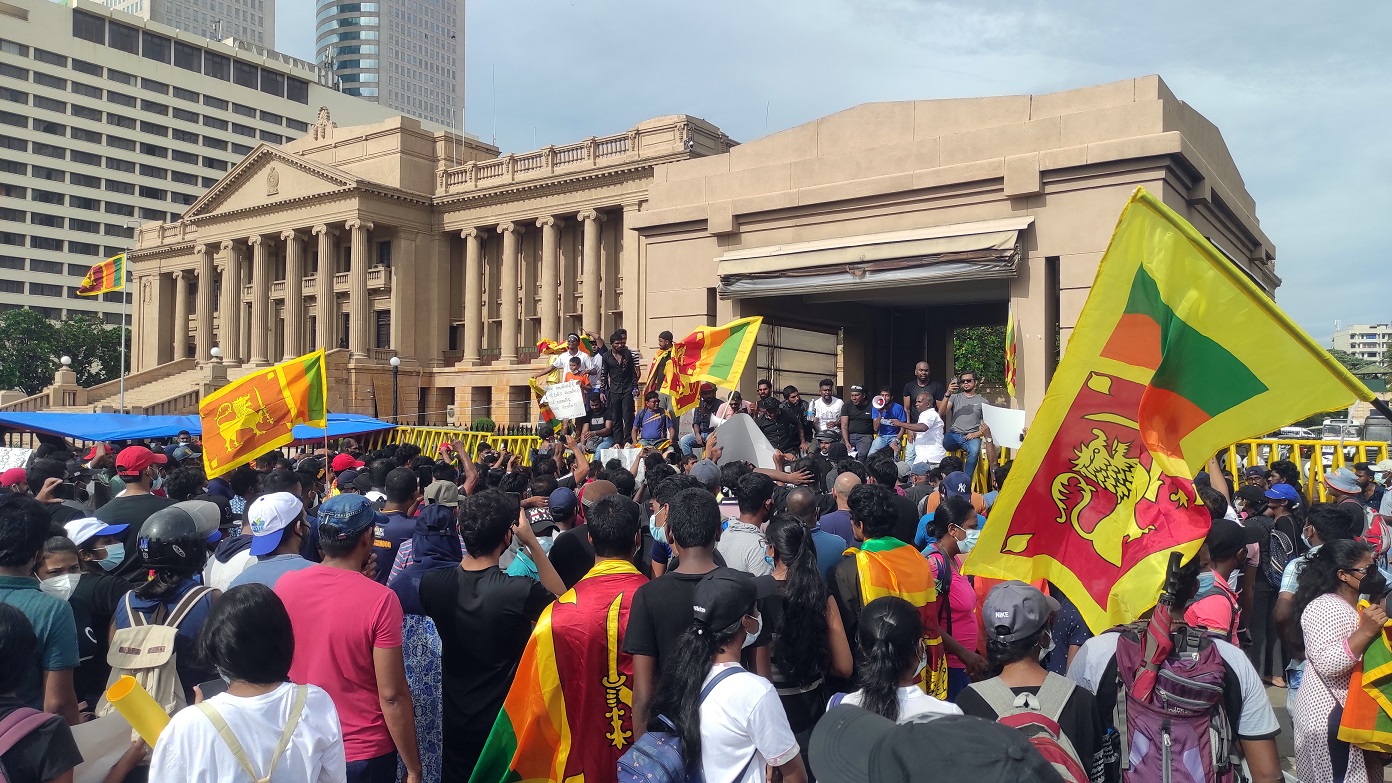 It has become commonplace to observe that, across the globe, civic spaces are shrinking and democracies are in regression. Year on year, organisations such as Freedom House and Civicus publish regular evidence of a steady and gradual erosion of democratic principles and practices across most regions of the world.

This erosion is most evident in government efforts to curb free speech, movement, and collective action. The dramatic increase in surveillance and security legislation over the past decade is just one indicator of the increasing number of levers available to governments to silence those who might wish to criticise their actions, or call for greater transparency and accountability.

We see these trends across the Asia region, and Sri Lanka protests in 2022. Picture: SUPPLIED they are troubling. The trend towards democratic regression and shrinking civic spaces does not manifest in the same way everywhere, however, and neither are civil society actors simply victims at the frontline.

Our earlier research on civic spaces in Southeast Asia in 2019 suggested the terrain for voice and action is shrinking and changing, while at the same time opportunities for collective action do exist, sometimes in surprising and unpredictable ways.

In seeking to better understand these opportunities as they manifest in South Asia, we piloted a survey instrument with 96 civil society organisations in Bangladesh, Nepal and Sri Lanka.

We sought to capture the perspectives of a range of different people on the changing parameters of civic spaces – to understand where opportunities may exist for supporting civic space in ways that promote democratic resilience and inclusive development, while also bolstering the case for the strengthening of civic spaces as a core global development priority.

For the purpose of our research, we define ‘civic space’ as the public space (concrete or virtual) in which formal and informal non-governmental organisations, associations or enterprises, social movements and/or independent media can: access information from government; participate and influence public policy- and decision-making; share information, communicate freely and mobilise; and – crucially – publicly contest and critique government decisions and actions.

We asked participants about their experiences of each of these, and what they perceive as national-level trends from their viewpoint. What did we find? Across the three countries, respondents reported that civic spaces are closing, but there are differences in the degree to which this is being experienced.

In Nepal, in comparison with Bangladesh and Sri Lanka, we found that civic spaces are quite buoyant. Despite considerable political instability over the past two years, and the economic and social challenges of the COVID-19 pandemic, Nepali civil society appears optimistic about the spaces they occupy.

However, when asked directly, most interviewees (65 per cent) agreed with the statement “civic spaces are shrinking”, and 80 per cent of respondents said that some issues – such as anti-corruption, access to justice, and public sector reform – have become too difficult for civil society actors to engage on.

The majority in both also noted it is more difficult for the media to be critical of government than it was a few years ago, and that it is harder to share information and communicate freely online (and in Bangladesh, also in physical spaces).

A very significant majority in both (94 per cent in Bangladesh; 73 per cent in Sri Lanka) have observed an increase in government scrutiny of online activities. As in Nepal, most respondents in Bangladesh and Sri Lanka are unequivocal that civic spaces are shrinking (85 per cent and 96 per cent, respectively), and that their countries are becoming less democratic (68 per cent and 67 per cent, respectively).

Yet there are nuances. In Bangladesh, a slim majority of participants feel it is easier to access information from both national and local governments than it was a few years ago, and that there are issues on which it is becoming easier for civil society to engage, such as climate change.

68 per cent of respondents in Bangladesh believe social media is making it easier for citizens and civil society to engage with government (while that figure in Sri Lanka is 37 per cent).

Our results also revealed an interesting anomaly: a majority across all three countries reported that collaboration between civil society and government, at both national and local levels, has improved in the past five years.

What do these findings suggest? While civil society actors face numerous constraints – and these are increasing in Bangladesh and perhaps still in Sri Lanka – they tend to relate to those roles in which civil society challenges or critiques government.

Levels of collaboration with government are either stable or are increasing, particularly at local levels – illustrating the critical role that civil society organisations often play in supporting the delivery and implementation of government programs and schemes.

On the one hand, this may have interesting implications for new opportunities to arise, particularly for the success of decentralisation agendas in all three countries. On the other, it may indicate that the trend towards encouraging civil society into more ‘constructive engagement’ with government may itself contribute to closing off some of the more contested spaces, making it harder for those who maintain a critical distance from government to operate.

Sectoral issuebased spaces exist or appear to be opening where the issue is not likely to challenge the political legitimacy or agendas of the government. Our results also seem to illustrate how the political system affects the shape of civic space.

Nepal is federalising fast, with power and authority moving away from the centre, while Bangladesh and Sri Lanka (pre-political crisis) are heavily re-centralising power and authority. There may also be a relationship between the health of ‘political space’ and civic space.

Nepal demonstrates considerable plurality with a diversity of political parties, while Bangladesh and Sri Lanka have seen dominance by, or an increase in, political monopolies in recent years. Lastly, our research suggests that diversity in civic space may be key to democratic resilience.

Nepal has a more diverse and buoyant civil society, including more informal organisations and social enterprises, enabling a more agile sector and faster coalescing of coalitions and networks.

Civic spaces in Bangladesh and Sri Lanka tend to be dominated by more formal and well-established civil society organisations. In the next stage of our research, we aim to understand in more depth how different actors are responding to curbs on civic spaces across the region, and what this might tell us about emerging opportunities for external supporters of democratic resilience.

Sri Lanka postscript Our data was gathered in early 2022, before the full weight of the debt-centred economic crisis was felt, and prior to the wave of violence that rocked the beleaguered country on 9 May.

It is not at all clear how the situation will develop, nor what impacts – shortor long-term – it may have on civic spaces, but it does highlight the significant role that informal collectives and movements can play in claiming civic spaces and demanding accountability, even as those spaces might be limited.

Given the history of authoritarian rule, it is inspiring to observe the collective action of ordinary citizens – in some cases bridging traditional political loyalties – who are camped outside the office of the President, demanding curbs on unfettered executive powers, restoration of democratic principles, and protection of civic and fundamental rights.

A central theme that stands out in our research so far is the centrality of open, vibrant and inclusive civic spaces that provide the terrain for a diversity of actors to imagine and act. As the extraordinary protests in Sri Lanka demonstrate, these spaces are being reconfigured as new and non-conventional actors move in to protect democratic values and civic freedom.

• Gopa Thampi is director of Economic Governance at The Asia Foundation, Sri Lanka.

• Sumaya Saluja is inclusive governance specialist with experience in programming and research with a focus on strengthening civic space, inclusive urban governance and addressing inequalities.

• Sunil Pillai an international survey consultant with over two decades of experience designing and managing surveys across Asia.

• Nicola Nixon is senior director, Governance, at The Asia Foundation, based in Hanoi. This article, part of a collaborative series with The Asia Foundation, appeared first on Devpolicy Blog (devpolicy.org), from the Development Policy Centre at The Australian National University.