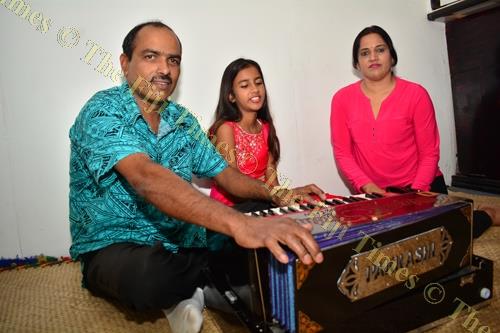 HAVING an ambition and passion for singing from a very young age has paid off for 11-year-old Shranvi Ram who is making a name for herself in the local Hindi music industry.

In this week’s Backtracks column, this newspaper caught up with Shranvi together with her parents to highlight her achievements as one of the youngest singers in the country.

Originally from Dreketi in Macuata, the family moved to Suva and according to her father, Jag Ram, music was a common norm in the family as most of his family members were singers of Hindi hymns and music.

“My daughter started to show interest and accompanied me to places where I used to go singing. I knew then that I needed to train and guide her,” Ram said.

“She was four years old that time and since then, she has never looked back. I clearly remember her first stage performance was at Samabula Primary School.

“Our family is known for singing, but little did I know that she will have that instinct to carry the family trait.”

“It was titled, Northern Angel with 10 songs altogether,” he said.

“She sings ghazal, kirtan, bhajan, qawali and movie songs. She usually goes and sings during prayers, celebrations and at weddings.

Ram said her daughter was determined to reach her full potential despite her wanting to be a doctor when she grew up.

He said Shranvi was also lucky to be among a handful of local musicians at her age and to have her songs played on popular Hindi radio stations in the country.

Shranvi said the reason she loved music was because she felt happy whenever she sang and performed.

“My father has eight brothers and three sisters who are all musicians. Apart from being happy when I sing, this is the other reason why I sing because of my uncles and aunties,” she said.

“Since it’s the school holidays now, I practise three times in a week with my mother who is also a good singer.”

The shy Gospel Primary School student mentioned that her love and passion for singing didn’t distract her from her studies.

“My education comes first as I want to become a doctor when I grow up. I also want to continue singing as I grow up,” she said.

Her father said the family had not thought of Shranvi pursuing singing as a full-time career yet.

“At the moment she loves what she is doing. Singing and studying together. We are very supportive of her,” Ram said.

“She has only performed within Suva but we are making plans in the future to travel around Fiji and let her sing.”

He added in the beginning, Shranvi was scared to sing in front of a large crowd but she slowly overcame that after several performances.

“She was scared in the beginning but after performing many times now in front of many people, she is used to the feeling now,” he said.

“She is learning to play the harmonium now. We have been giving her training and it is only a matter of time that she learns to do so. After she learns this, then she will learn to play other music instruments.”

He said Shranvi’s latest performance was at a birthday party just a few weeks ago where those present appreciated her talent.

“Wherever we go, people come up to us and ask if she is your daughter that we hear on the radio singing. This makes us very proud because at her young age, people are slowly getting to know her,” he said.

“She also loves to sing on karaoke when she is singing movie songs. Her mother helps her a lot in this.”

Shranvi said her brother and parents were the driving factor behind her motivation to sing and perform.

Meanwhile, Shranvi’s mother, Ranjana Devi said her daughter had a pleasant voice and she was proud of her achievements.

She said even though the family had singing background, she took the initiative herself every time to learn something new and on her own.

“When she released her first album, we were sure people would receive it in a positive manner. Now we want to help her compose and release another album in the coming years.”

She said Shranvi’s album songs were played on Radio Sargam and Radio Fiji Two stations in the country.

With so many upcoming singers in the country, Shranvi’s dedication stands as an example of how children start young from an early age to make a name for themselves in any ambition they wish to pursue.