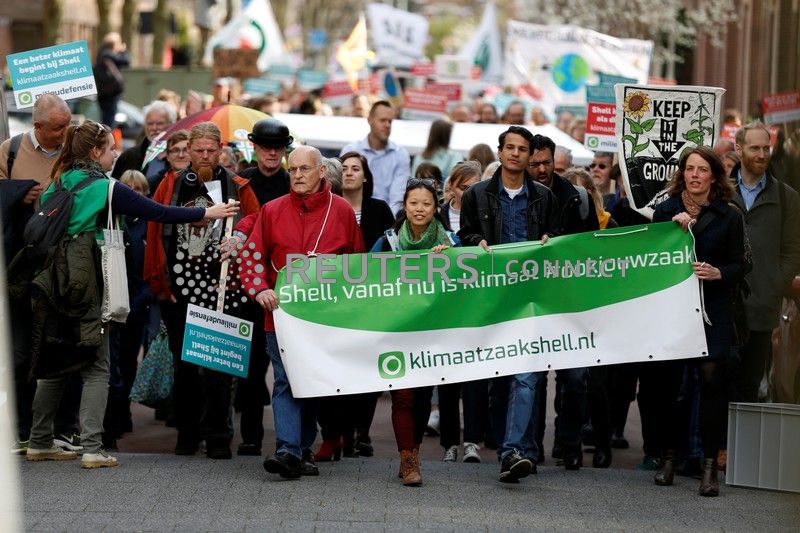 Environmentalist and human rights groups demand Royal Dutch Shell to stop the extraction of oil and gas, outside of its headquarters in The Hague, Netherlands April 5, 2019. REUTERS/Eva Plevier

AMSTERDAM (Reuters) – Environmentalist and human rights groups said on Friday they had started a lawsuit against Royal Dutch Shell in the Netherlands to force the energy firm to cut its reliance on fossil fuels.

The groups, including Greenpeace and Friends of the Earth Netherlands, handed over a court summons to Shell at its headquarters in The Hague, demanding it stop extracting oil and gas and cut its greenhouse gas emissions to zero by 2050.

“Shell spends billions on oil and gas exploration each year, with current plans to invest just 5 percent of its budget in sustainable energy and 95 percent in exploiting fossil fuels,” the groups said.

They said Shell’s plans were “incompatible with the goal to limit global temperature rise to 1.5 degrees Celsius of warming” under the goals set out in the Paris Agreement to combat climate change.

Shell on Friday said the case should not be brought to court as it supports the goals of the 2015 pact and has promised to cut its contribution to global greenhouse gas emissions in half by 2050.

“We also feel action against climate change is needed right now”, the company said in a statement.

“We have invested billions of dollars in a range of CO2-light technologies, such as biofuels, hydrogen and wind energy and we want to continue to grow these activities.”

Activists say this commitment does not go far enough to ensure climate goals can be reached on a global scale.

“With their current strategy, they will keep the world dependent on fossil fuels in the next 40 years,” Greenpeace campaigner Eefje de Kroon said.

The groups said more than 17,000 Dutch citizens signed up to support their case against Shell.

The company has about six weeks to reply to the court summons, after which a judge will decide on further proceedings.