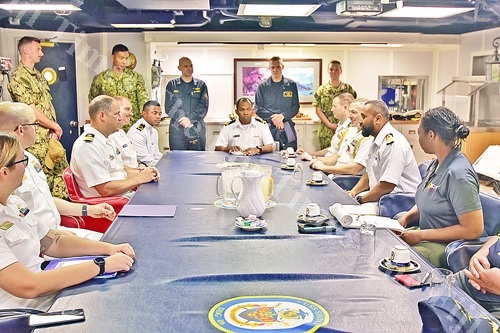 The United States Navy (USN) ship was berthed at the Kings Wharf in Suva earlier this week as part of their Oceania Maritime Security Initiative (OMSI) deployment.

Commanding officer Andy Strickland said they were honoured to partner with the Fijian Navy in their OMSI deployment.

Charge d’ Affaires at the US Embassy in Fiji Michael Goldman highlighted the importance of Fiji and US relations, saying they were a Pacific nation because they have always been in the Pacific.

“We’re always going to be in the Pacific. We share a commitment, as a Pacific nation, to the peace and security of the Indo-Pacific region,” Mr Goldman said.

“We fought alongside our Pacific partners honourably and bravely. We share values in democracy, bonds in history and faith. We are your brothers and your sisters. We share a commitment to a free and open Indo-Pacific.”