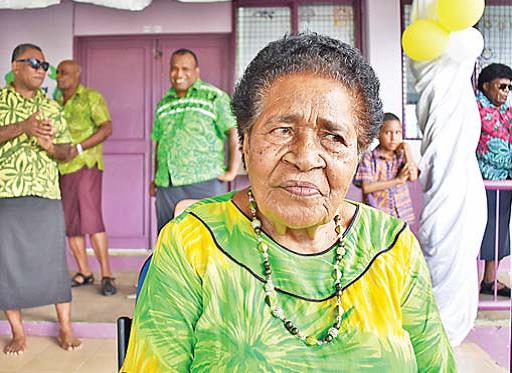 ESETA Samoce Daniva Tora of Naviyago Village, outside Lautoka, maybe 89 years old but still remembers her first day of school as a Class One student at Vitogo District School.

There were no classrooms — they started at the church on Vitogo before the initial school blocks were built on where the school is situated today.

She is one of the pioneer students of the school which caters for Naviyago, Vitogo and the nearby settlements outside Lautoka City.

While age maybe catching up, Ms Tora still finds time to tell her grandchildren and great-grandchildren all she can still remember about the school which allowed her to earn a decent living and provide for her family.

On December last year, she was recognised at the school inaugural reunion day which brought together old scholars from around the country and abroad.

It was an emotional day for the Naviyago lady as she sat on the corridor and reminisced of the good, old primary school days.

“When I started in Class One, there were no classrooms so we had started school at the Vitogo church,” Ms Tora shared.

“Most of us who we went to school together have died and I am the only surviving member of our class here today.

“I am glad that such a reunion has been organised when I am still alive so I can talk about the struggles we went through to the younger generations.”

Those struggles enabled the 89-year-old to do her best and earn a place at Ballantine Memorial School to further her secondary education.

This account was shared during the school reunion as she sat with pride and smiled throughout the day while shedding at least a few tears in memory of her fallen colleagues and those who have passed on and did not witness the school’s first ever reunion.

Organiser Anare Sovu said the event allowed them to come together and rekindled ties as most of them had been living far away from home because of work and family.

The success of this inaugural reunion has also urged the old scholars to hold an annual event for the school and raise funds to assist in the maintenance of the 83-year-old school.

“Most of us have not met for the past 20 years and we are thankful that such an event has been organised to allow us to come together and renew our ties and friendship,” Mr Sovu said.

“We hope this will be an annual event and we look forward to meeting in the coming years.”

The Vitogo District School reunion was a blessing in disguise for many people who are originally from the two villages but have been living in different parts of Fiji and the world for many years.

It was not just an event to raise funds for the school, it was a day of merry-making, laughter, fun and sharing tears of joy as they have been able to give back to the school that pioneered the beginning of their academic career.