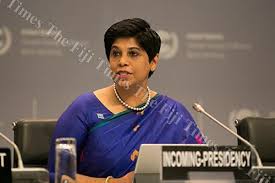 FIJI has been appointed as the vice-president of the Platform on Disaster Displacement (PDD) during the meeting of the steering group held in Geneva, Switzerland last week.

This, after PDD’s president France nominated Fiji to the new role.

The country’s ambassador to the UN, Nazhat Shameem, is expected to co-ordinate the new leadership role on PDD with the team at the Fiji Mission in Geneva.

While speaking on behalf of the Fiji Mission, First Secretary of the Fiji Mission in Geneva, Vueti May thanked the president of PDD and permanent representative of France, ambassador Francois Rivasseau, for the trust and confidence that has been placed in Fiji for the new leadership role.

“Fiji is honoured to be appointed as the vice-president of the PDD at UN,” he said.

“We acknowledge France for giving us this opportunity to serve the platform and we plead to all PDD steering group members and partners for continued support to ensure that we deliver on the mandates before us.”

Mr May said the work of the PDD is central to Fiji’s strategic development priorities and its commitment to enhance response to climate change and disaster.

Bangladesh and Germany had previously led the PDD since its inception in July 2016 and also Fiji recognised the effort of the PDD Secretariat’s efforts leading to the adoption of the PDD Strategy for 2019 to 2022 acknowledging the steering group members and partners for the co-operation including the support of those states that had pledged for additional financial commitment.

PDD is a state-led initiative, which was endorsed by 109 states in October 2015 seeking to implement the recommendations of the Nansen Initiative Protection Agenda, which supports states and other stakeholders to implement the recommendations for the greater protection of cross-border displaced persons in the context of disasters and climate change.

Fiji was also recognised at the UN as the first Pacific Island country to be represented at the United Nations Human Rights Council with its role as vice-presidency at the UNHRC.