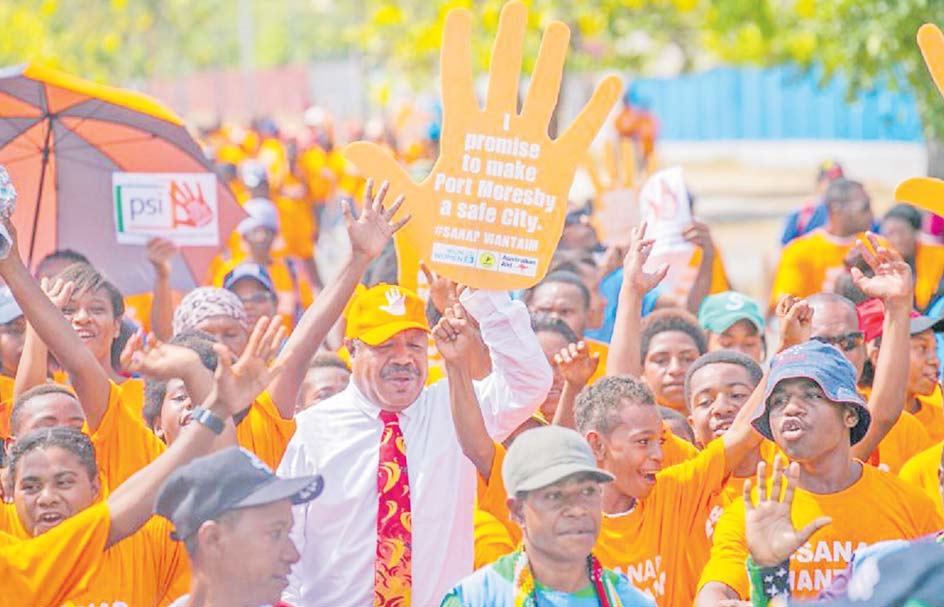 In this fi le picture hundreds of people turned out for the SANAP WANTAIM campaign walk to Parliament to show their support for victims of gender based violence and to raise awareness for Port Moresby city to become a safe city for women and girls. Picture: https://devpolicy.org

Sexual violence against children is a fraught, sensitive subject that is extremely difficult to raise without potentially causing further harm.

As such, only a minority of incidents are reported to police. Still, cases are regularly brought to the attention of child protection authorities and police, as well as local community leaders and various justice fora.

We do not have a clear picture of the consequences and outcomes from such reporting. This article draws on a study undertaken in Papua New Guinea (PNG) past year in which we examined criminal justice responses to family and sexual violence (FSV).

That study sheds some light on the kinds of cases brought to the attention of the authorities and the considerable challenges involved in reaching any kind of resolution through the criminal justice system.

The consistently poor outcomes of sexual violence cases globally have been termed “the justice gap”, which is even more pronounced when the victims are children and the setting is a low-income country such as PNG with seriously frayed and uneven service delivery.

Most cases of sexual violence reported to the specialist police units (Sexual Offences Squads, or SOSs) in PNG’s two largest cities — Port Moresby and Lae — involve female victims aged under 18 years. These cases relate to more serious indictable offences that are prosecuted via committals to the National Court.

Records from the Lae SOS over a six year period reveal similar complainant profiles, but fewer per month on average. Records indicate that there were 13 complainants per month, of whom 93 per cent were female and 69 per cent were aged under 18.

The Lae SOS records indicate that:

On average, 18 days elapsed between the time of the incident and the matter being reported to the police.

In recent years, more cases where the incident occurred sometime in the distant past, often on more than one occasion, are being reported months or years after the event.

The majority of complaints involving children resulted in sexual penetration charges, while rape was more likely to be charged if the victim was an adult.

The SOSs appear to have a higher arrest rate than colleagues in other areas of the police’s criminal investigation division, with arrests recorded in approximately one-third of cases.

Serious FSV cases are referred to the specialist Family and Sexual Violence Offences (FASO) unit in the Office of the Public Prosecutor in Port Moresby.

Their records show that for sexual offences, 80 per cent of victims were under 16, the majority of defendants are adult males and in 80 per cent of cases a relationship of trust, what the FASO unit terms ‘blood relations’, existed between the offender and the victim.

The FASO unit appeared to have an almost equivalent number of acquittals and discontinuations compared to convictions for FSV offences (see Putt and Dinnen 2020 at devpolicy.org for more detail).

Based on the available data, we estimate that only six per cent of the complaints made to the SOS in Port Moresby ever reached the National Court.

This was due in part to a high number of withdrawals and non-appearances by victims and witnesses, contributing factors to which include out-of-court compensation payments and/or threats from the perpetrator and/or relatives. In addition, there are often delays and long waiting times, especially for National Court trials.

The backlog of cases means that two to three years can elapse between the arrest date and the completion of a trial.

The FASO unit referred to the difficulties of preparing vulnerable witnesses for court proceedings, particularly very young child victims, whom the unit found can be extremely shy, afraid and/or ashamed to talk about the incident(s).

Delays lead to young victims or witnesses forgetting their evidence, witnesses moving and losing contact with police and victims growing up, getting married and subsequently refusing to come to court.

The criminal justice data shows that there is a constant stream of serious cases of sexual violence against children being reported to police in PNG’s two largest urban areas.

Cases reported to the SOSs highlight just how young many victims are, while cases referred to the FASO unit show how often the alleged perpetrator is a family member or otherwise connected to the victim’s household.

For these serious sexual crimes, the rate of attrition is high, with many complainants seeking to withdraw the case and important witnesses not reappearing. The pressures exerted on the victims, from both family and community, can be huge.

In addition, the justice system faces considerable challenges with such cases, including gathering adequate evidence from children, especially in relation to historical cases, and the inevitable delays and adjournments in judicial proceedings, with cases sometimes taking years. Such challenges increase the likelihood of a victim withdrawing from the case or not appearing.

These issues are well understood by criminal justice practitioners in PNG, and there have been sustained efforts to improve the system in recent years, including making it more child friendly through specialist units and positions, staff training and improved amenities.

While important, these improvements focus on the occasions when the victim (and their caregiver) has contact with police and the court. More could be done to improve the immediate and longer term protection and support of the child, and their guardian, in the periods between contact with the system.

Our research also highlights the vital role of specialist FSV services in the non-government sector, particularly in assisting with referrals and transport, explaining the court process and endeavouring to stay in touch with the child and their caregiver.

During a state of emergency, such as was imposed recently in PNG, it is essential to ensure that specialist FSV services— safe houses, case management and crisis centres — have the additional resources to continue operating, and that there is capacity within the justice sector to intervene and deal with urgent FSV cases, at a minimum in the main urban centres.