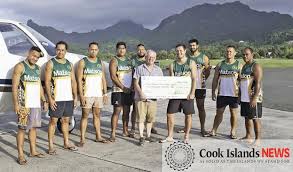 RAROTONGA, 10 MARCH 2019 (COOK ISLANDS NEWS) – Five players will make their debut for the Cook Islands at the Hong Kong Sevens which will be held next month.

National team coach Vase Samania named his 12-member squad which included five newcomers – three of who are non-Cook Islanders based in Rarotonga.

They are joined by New Zealand-based Owen Karati and Gene Te Amo, who are also set to make their Sevens debut.

Cook Islands Sevens will be skippered by veteran Stephen Willis and he will be assisted by Robert Heather Jr as the vice-captain.

The national team qualified for the prestigious Hong Kong Sevens, which will be held from April 5-7, after finishing sixth at the Oceania Sevens Championship in Fiji last year.

In a statement, Cook Islands Rugby Union (CIRU) development manager Ben Koteka congratulated the players who were selected to represent the country at the annual tournament, part of the World Rugby Sevens Series.

“Whilst CIRU congratulate those that have been selected we would also like to thank and acknowledge the wonderful support of all those who have been part of the wider training group and who have just missed out on selection for Hong Kong, bearing in mind that we still have a long season ahead with other tournaments to attend including the very important Oceania qualifier in November,” Koteka said.

“The squad have been training hard since they qualified in November, 2018 and some players were not considered due to injury.”

The Rarotonga-based contingent will depart the country on March 27 and assemble in Auckland for a three-day training, together with the New Zealand and Australia-based players, before travelling on to Hong Kong.