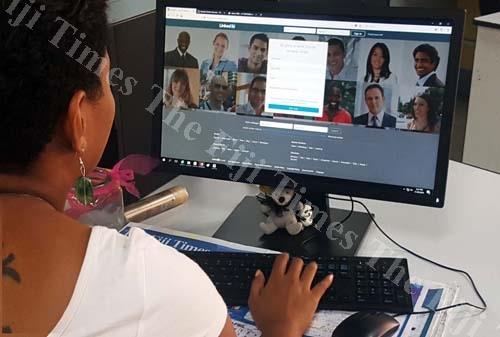 A social media user on the internet. Picture: ELIKI NUKUTABU

TWO major telecommunications companies have assured their customers they would not be paying the 10 cents levy for every gigabyte they use.

Telecom Fiji and Vodafone have released their statements, respectively, following the fast-tracked Telecommunications Amendment Bill on Thursday, stating they would absorb the 10 cents levy.

According to Vodafone, it was important the data levy was put into perspective.

“Prior to the imposition of the data levy, the telecommunication companies had been paying a levy on voice calls,” stated the company.

“This has now been repealed by the Government which means telcos will no longer be required to pay the levy on voice calls going forward.

“This, in turn, has been replaced by the data levy.”

It also stated that Government had got FINTEL — which was the gateway provider for international communication and the wholesaler for internet bandwidth — to reduce the wholesale rates for the internet which Vodafone acquires for its internet.

“The removal of the voice levy and the reduction in internet whole bandwidth cost has helped Vodafone to absorb the data levy and not pass on these costs on to its consumers.”

The company said its success was built on the delivery of innovative and high-quality products as well as services.

“Our focus has always been to use technology to deliver practical and cost-effective solutions for our customers.

“With data and internet becoming increasingly important to our subscribers with the Internet of Things in a highly connected world, we are pleased to inform our customers that we will not be passing on the data levy to our customers.

“We look to creating more use cases and demand for our services to drive growth rather than the focus of price.”

Vodafone stated it would continue to offer competitive data plans for its network users as it has always done.

Telecom Fiji has also assured its customers would not feel the effect of this levy.

The chief executive officer, Charles Goundar, stated their customers would not pay a single cent of the levy which was introduced to help with the technological development in the rural areas.

“With the removal of the voice levy and the reduction in landing costs at FINTEL, Telecom is able to pay the 10 cents levy without pushing it on to our loyal customers,” said Mr Goundar.

He added the company would always support growth of rural and maritime areas.

“We are a 100 per cent Fijian-owned company and have always helped development in rural areas, many times installing satellite technology for schools despite receiving little returns. “This is because we believe in investing in Fijians,” Mr Goundar said.

The company has a long-term plan to increase its fibre footprint across Fiji as well as provide more essential internet services to thousands of Fijians.