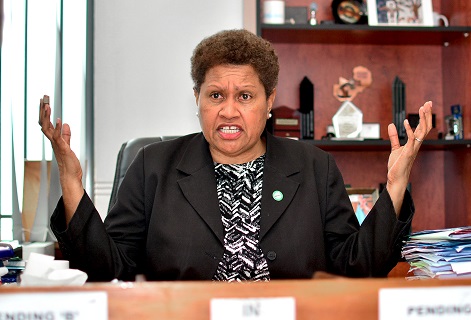 Parliament Secretary General Veniana Namosimalu speaking to the Fiji Times during an interview at her officer in Parliament yesterday. Picture: JOVESA NAISUA

FORMER Parliament secretariat staff member Iliesa Raiduduva, who is accused by the secretary general of Parliament of leaking the video of Prime Minister Voreqe Bainimarama allegedly manhandling Opposition MP Pio Tikoduaudua outside Parliament on August 9, was asked to resign on humanitarian grounds.

This was revealed by secretary general to Parliament Viniana Namosimalua at her office in Suva yesterday. Mr Raiduduva, 35, was asked to resign on September 6.

When questioned on what were the Parliament procedures in dealing with such matters, she said because of the severity of the allegation, Mr Raiduduva should have been terminated.

She claimed the former civil education officer had breached his contract and the neutrality of Parliament.

“When someone breaches their contract, a report is brought up to me and I will look at it and the evidences as well, but in this case no report came to me,” Mrs Namosimalua said.

Instead, she claimed Mr Raiduduva was interviewed and admitted that he had leaked the video to certain people.

She then gave him the options — hand in his resignation or face termination.

In such cases, Mrs Namosimalua said the employee was given 30 days to resign.

“In this case, I had waivered the 30 days to allow him to get leave entitlements and be compensated, all on humanitarian grounds.

“I hate to send people home because if it was done to me I will not like it.”

Mrs Namosimalua said the decision was made after taking into consideration the institution’s sanctity and to show that it was not right to breach Parliament’s neutrality.

“If I terminated him, the chances of him getting another job will be very slim. I would be jeopardising his career. He has a family and a mother to look after.

But I know a lot of people will criticise me for this. Resignation was the lesser of the two evils. From my conscience, I really want him to get another job.”