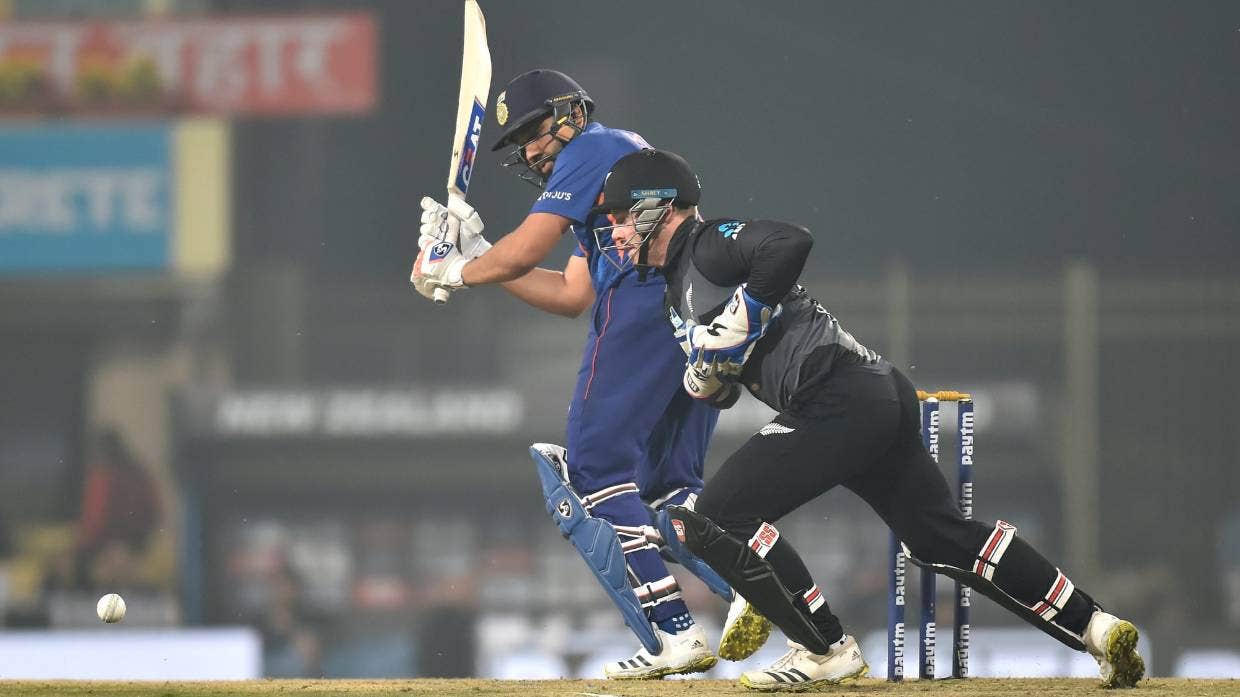 New Zealand slipped and slid to a Twenty20 international series cricket defeat under the Ranchi lights, as captain Rohit Sharma powered India to a seven-wicket victory in game two on Saturday (NZT).

Sent in to bat, the Black Caps were well short of a competitive total when posting 153-6 and with the night-time dew making it difficult for the bowlers to grip the ball it was always going to be tough to defend.

India openers KL Rahul (65 off 49) and Sharma (55 off 36) plundered 117 to set up victory and despite skipper Tim Southee’s two wickets in four balls in the 16th over, the hosts got home with 16 balls to spare.

It was a third successive defeat for the New Zealanders – all when batting first – since they won five straight to make the T20 World Cup final against Australia.

Kane Williamson was again a key absentee as he rests for next week’s two-test series, with Glenn Phillips their topscorer with 34 as they couldn’t kick on from a solid start.

It leaves Monday’s (2.30am NZT) game three in Kolkata as a dead rubber, the Black Caps’ final T20 international of the year as they switch focus to the tests as World Test Championship title holders.

Southee ended with outstanding figures of 3-16, including Sharma’s wicket to a slower delivery, but it was a tale of woe for the other bowlers, defending a skinny total.

New Zealand couldn’t break through early and Trent Boult finished with 0-36 off four, and Adam Milne 0-39 off three as the two classy India openers punished some wayward offerings into the packed stands.

Spin wasn’t a factor either with a slippery ball which was changed by the umpires several times, as Mitchell Santner had 0-33 off four and Ish Sodhi 0-13 off two.

Boult also gave Sharma a big let-off, dropping him on 29 off Santner, with the total 77-0 in the 10th over.

New Zealand recalled Jimmy Neesham and Sodhi for Rachin Ravindra and Todd Astle, meaning 10 of their 11 from the T20 World Cup final defeat took the field in Ranchi.

Mark Chapman, in for Williamson, was the only change from that lineup who lost the decider to Australia in Dubai.

Stand-in skipper Southee needed to call correctly when Sharma flipped the coin, but India got the early advantage when it fell their way.

It started well for New Zealand as they rattled up 64-1 off the six-over power play and looked set for 175-plus.

Martin Guptill showed some intent, cracking 31 off 15 balls, before he was bounced out by a short one from Deepak Chahar.

hat was the story of the Black Caps’ innings; some promising starts but no major partnerships or decisive knocks.

Daryl Mitchell (31 off 28) and Phillips (34 off 21) were the other main contributors but NZ could only manage 89 off 84 balls after that power play.

Tim Seifert (13 off 15) and Neesham (3 off 12) couldn’t launch when needed and the Black Caps’ bowlers faced an uphill battle, defending 11 fewer runs than game one in Jaipur.