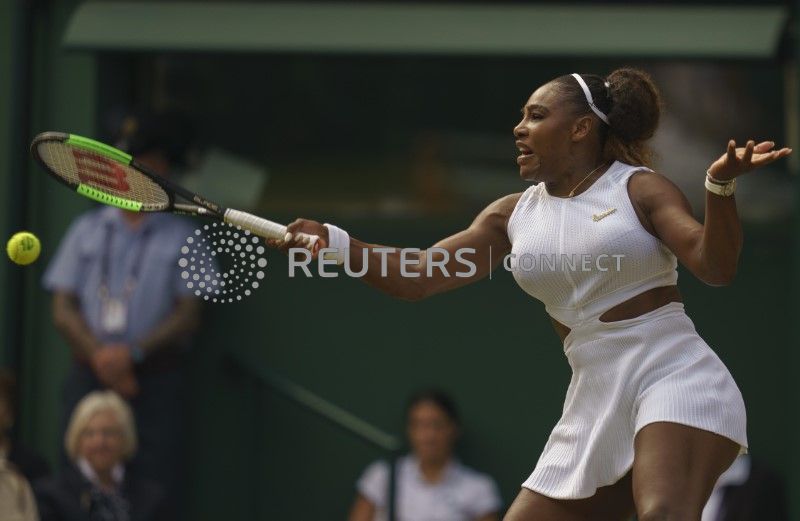 LONDON (Reuters) – Serena Williams no longer wants to obsess about elusive Grand Slam “number 24” and Simona Halep is desperate to win Wimbledon more than to stop the American reaching that milestone but there will be no place for either to hide in Saturday’s final.

No matter who wins the title decider on Centre Court, the one thing for certain is that it will be a historic occasion.

The 37-year-old Williams is chasing an eighth All England Club singles crown which would see her match Australian Margaret Court’s all-time record of 24 major singles titles.

National pride will be at stake for Halep as she bids to become the first Romanian to win a singles title at the spiritual home of grasscourt tennis.

Halep said if she dwelt on Williams’ records over the past 21 years it might be game over before she stepped on court for a contest compatriot and gymnastics great Nadia Comaneci said would be “watched by every Romanian alive on the planet”.

“I will focus on myself. I’m not thinking about her record. Her records are huge already. It’s nothing about that. It’s just a tennis match, big challenge, a great match. So I will try just to give my best,” said Halep, who has lost just one set so far.

A quick study of their rivalry would also suggest Williams will probably be the one holding aloft the Venus Rosewater dish considering she has won nine of their previous 10 meetings.

The 27-year-old Halep’s only victory over Williams was almost five years ago, while the American has won all three of their Grand Slam clashes, including at Wimbledon in 2011.

So which memory from those tussles will Williams rely on as she gets ready for what could be one of the most memorable days in the history of women’s tennis?

“The biggest key with our matches is the (6-0 6-2) loss that I had. I never forgot it,” said the 11th seed, who is also bidding to become the first mother to triumph at Wimbledon since Australian Evonne Goolagong beat American Chris Evert in 1980.

“She played unbelievable. That makes me know that… she can get there again. So I have to be better than that.

“There’s so many impressive things about her. Obviously her tenacity, her ability to find power. Can’t underestimate her. She’s like a little powerhouse. I feel like she’s back. She wants to prove that she can do it again.”

Halep will also take heart from their battle at this year’s Australian Open being a close one and the fact that she has more than just an A-game in her repertoire.

“I have a better game these days. I can play everywhere, against anyone. When I go on court… I know how to change some things when (other things) don’t work very well,” said the 2018 French Open champion.

“Now, I believe that I have my chance to win against her. I respect a lot what she has done and what she’s doing. But I feel mentally stronger facing her.”

A ‘Plan B’ or even ‘Plan C’ could come in handy for Halep as Williams was at her devastating best in a 59-minute destruction of unseeded Czech Barbora Strycova in the semi-finals.

Moving as smoothly and striking the ball as crisply and as powerfully as at any time in her career, the American has so far unleashed 45 aces and won 83 percent of her service games.

Playing mixed doubles with Andy Murray, albeit in a losing cause this week, has also helped her to sharpen her volleys – an ominous sight for anyone on the opposite side of the net.

Williams has already had two failed attempts in finals to win that 24th major – after contesting last year’s Wimbledon and U.S. Open showpiece matches – and, regardless of what she says, everyone knows the American wants that record.

“It’s really not about 24 or 23 or 25. It’s really just about going out there and giving my best effort no matter what. No matter what I do, I will always have a great career.”