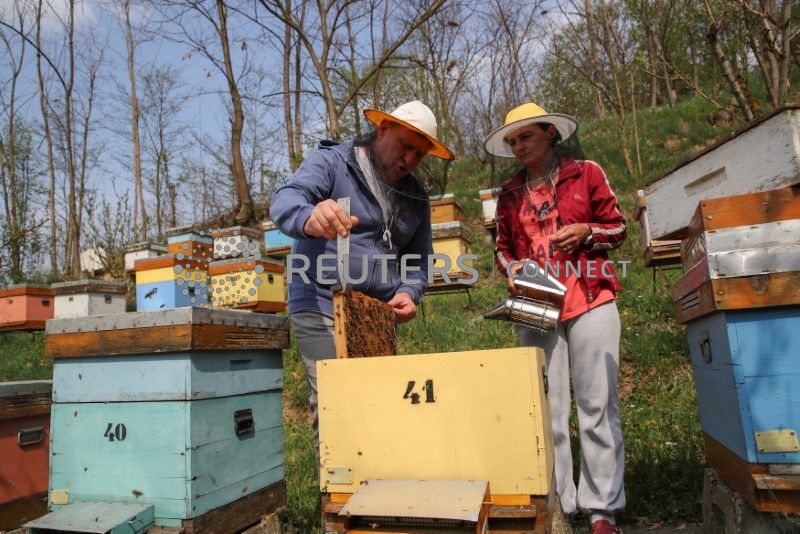 A beekeeper Nenad Savic holds a frame of a beehive in a village of Ripanj near Belgrade, Serbia, April 9, 2019. Picture taken April 9, 2019. REUTERS/Marko Djurica

BELGRADE (Reuters) – Early April in Serbia was sunny, orchards were in full bloom and honey bees from most of the country’s 1.2 million beehives were busy collecting nectar and pollen.

Within a week, however, bees suddenly started dying at several locations across the country. The pollen they were eating was poisonous because trees had been heavily oversprayed with insecticides.

Rodoljub Zivadinovic, head of the Beekeeping Association of Serbia, said the country’s agriculture sector could suffer damages of over $200 million a year due to a lack of pollination and if poisoning of bees continues.

“There can be horrible scenes, bees sometimes die on the spot and sometimes … much later … after they start consuming pollen which contains insecticides,” he told Reuters in an interview.

Since 2006, honey bees and other pollinators worldwide

have experienced rapid population decline, due to a number of factors, including the excessive use of chemicals.

Although Serbia, which wants to join the European Union, has imposed strict guidelines about the use of chemicals in agriculture, many farmers are ignoring them, said Nenad Savic, a beekeeper from the village of Ripanj, just outside Belgrade.

“All these chemicals that are banned in the West end up here and they are used until they run out of supply,” Savic said.

Poisoning of bees this year also affected parts of neighbouring Bosnia and Croatia, an EU member.

Vladimir Teznjan, a beekeeper from Stajicevo in northern Serbia, said that many farmers are treating seeds with neonicotinoids that are banned both in the EU and Serbia. Such chemicals are deadly for all insects.

“It is an open secret … I know that many farmers are buying them (neonicotinoids) on the black market,” he said.

The Serbian government and beekeepers launched an awareness and control campaign last month, advising fruit farmers not to use excessive quantities of pesticides and how to spray when bees are not active.

Agriculture accounts for around 6 percent of Serbia’s gross domestic product and its exports generated around 3.9 billion euros ($4.4 billion) last year, including fruits which directly depend on pollinators.

According to Serbia’s Beekeeping Association, the country is home to around 20,000 registered beekeepers. In 2017, Serbia produced over 7,000 tonnes of honey, 22 percent more than the previous year. It exported honey worth around $10 million.