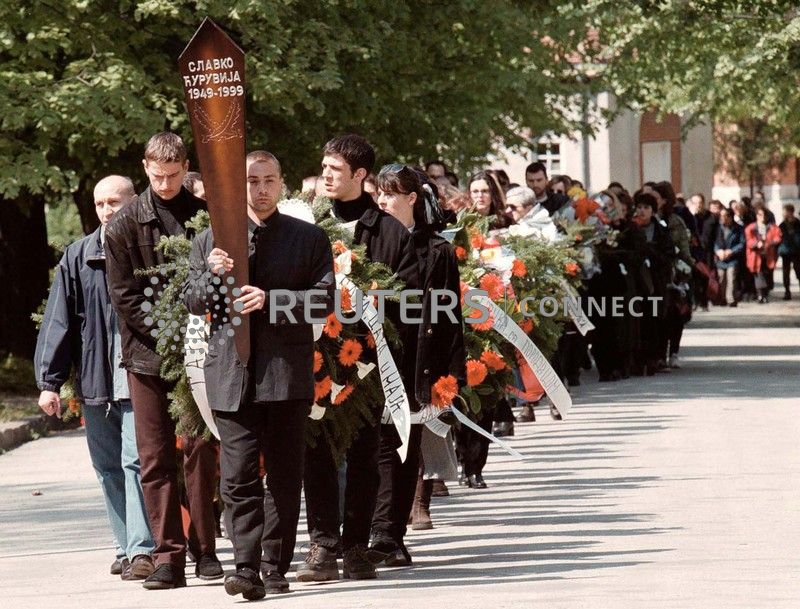 BELGRADE (Reuters) – Four people were sentenced to up to 30 years in prison by a Serbian court on Friday over the killing in 1999 of opposition journalist and newspaper publisher Slavko Curuvija, during the rule of late strongman Slobodan Milosevic.

Curuvija was gunned down on Orthodox Easter, days after a pro-Milosevic newspaper published an opinion piece saying he supported NATO air strikes against Serbia over its military crackdown on independence-seeking Albanians in its then-province of Kosovo.

“The accused are guilty of … the intentional killing of Slavko Curuvija, following instructions from an unidentified person,” Judge Snezana Jovanovic said.

Radomir Markovic, the former head of Milosevic’s feared Department of State Security, was sentenced to 30 years in jail for inciting murder.

Milan Radonjic, the-then chief of State Security’s Belgrade department was also sentenced to 30 years, while operatives Ratko Romic and Milan Kurak, who is at large and sentenced in absentia, were given 20 years for an aggravated murder.

The indictment, launched in 2017, said Curuvija was killed because of his criticism of Milosevic’s rule.

“(Curuvija) was murdered because of … criticising authorities and potential influence on public and actions of opposition forces,” the indictment, launched in 2017, said. “He died a martyr.”

All of the accused have the right to appeal. Lawyers for Markovic, Romic and Radonjic were not available for comment. The three men have denied any wrongdoing.

Markovic is already serving a 40-year jail term over his roles in the 2000 killing of former Serbia’s President Ivan Stambolic and 1999 attempted assassination of Vuk Draskovic, an opposition politician, in which four other people died.

Milosevic was extradited in 2001 to the International war crimes tribunal for former Yugoslavia in The Hague, where he died in 2006 before a trial verdict was reached.