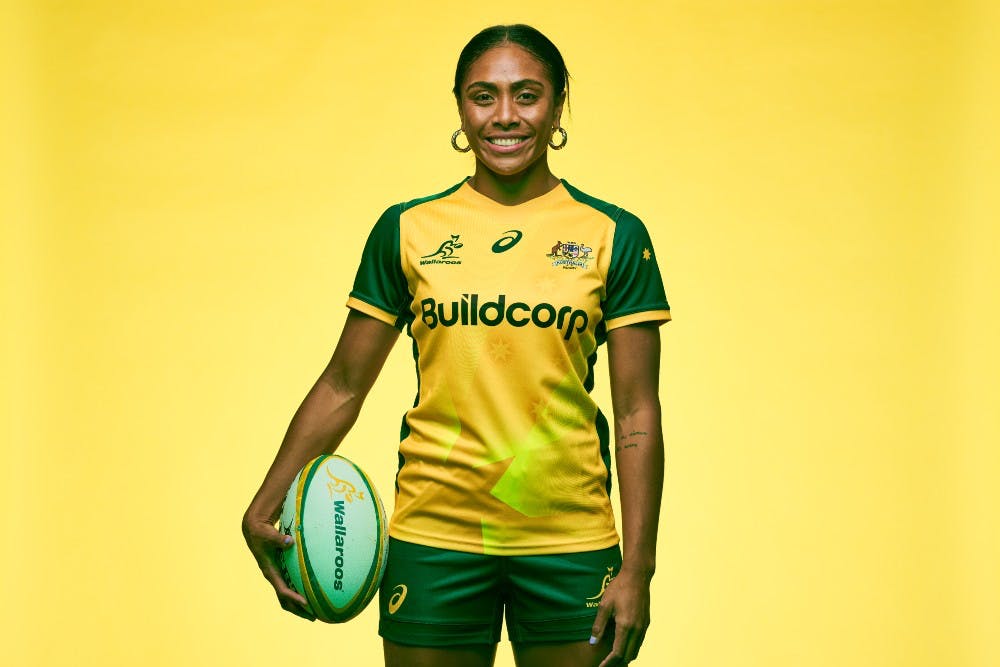 In his series on players reflecting on their debuts for Australia, Rupert Guiness speaks with Wallaroo lock Sera Naiqama who first played for Australia in the 2019 Oceania Championship.

When Naiqama first stood on-field in the Australian jersey, she was proud as punch to be representing Australia.

She was primed to respond to the selectors’ faith with a huge performance in the game in Fiji, the nation of origin of the Australian born player’s parents.

When she recounts the moment, the tears that well reinforce what it meant to her.

However, deep down there was one lament: the game was not a Test match.

Her debut for Australia was in a pool game, for ‘Australia A’ against the ‘Black Ferns Development’ team, not the Wallaroos.

It was in the Oceania Championships at Lautoka on November 22, 2019.

That first Test still eludes the 25-year-old. “I can confidently say of that 2019 squad I’m the only uncapped player,” says Naiqama who has imagined “thousands of times” about what it will be like playing a Test.

Naiqama admits it can be hard to accept, even if COVID is to blame with it forcing the cancellation and postponement of women’s games: “Sometimes I’m like, ‘Why do I keep doing this?'”

But then, it has helped her to appreciate what rugby offers.

“Often you’re asked, ‘Why do you play rugby?’ My answer has changed over the past year and half to ‘I play rugby because it shows me I can do good things with my life.

“It’s given me purpose. It would be easy to feel, ‘What if I’m done?

This is not for me.’ But it’s about, ‘How much longer can you hang in there to reap the rewards of your labour?'”

Naiqama was disappointed to miss Test selection against Japan and New Zealand in 2019.

But the honour of first playing in the Australian jersey that day in Fiji was real.

“Don’t miss your miracle because it doesn’t look like what you thought it would. That was my thinking throughout that campaign,'” she says.

“‘You travelled with the Wallaroos. There could have been an opportunity to play a Test. You didn’t get it; but you’re part of the ‘Australia A’ squad. How incredible is that? I also know my parents were proud of me.”

The journey from sevens to 15s

She answered a nationwide call out for players after rugby was accepted for the 2016 Olympic Games in the sevens format. But the ‘Olympic sell’ was not what led her to take up the game.

Born into a football family as one of two sisters with two brothers, Wesley and Kevin who became professional National Rugby League players, says she saw it as: “a great opportunity to show my brothers I’m better than them.”

She has not forgotten her days of playing backyard footy with them all.

“You had to run as hard as you can to break through. Then someone cries because someone’s throwing fists after the other one hit them. But it roughed me up in the right ways.'”

It was also an opportunity to finally find her potential in a sport.

Naiqama went on to represent NSW Schoolgirls in 7s, but in 2013 started the 15s game by playing for Sydney University at a time when the men and women programs were independent.

Naiqama soon rose from club level to the Sydney and NSW representative sides, and switched from playing as an outside back to No.8 and the second row.

Her one limitation was her role as a youth leader at church.

“I couldn’t commit to ‘rep’ training. I was committed to being a youth leader. I couldn’t fathom leaving church to play football.”

But in 2016, Naiqama was convinced otherwise by the respected veteran Sydney University second rower, Haruka Takahashi who told her: “‘You need to try, they need second rowers.’ I hadn’t played representative 15s. It was a daunting thought. But I trialled and made my first Sydney squad before Super W with NSW Waratahs started in 2018.”

Naiqama’s selection in the Sydney squad for the national selection tournament, a pre-cursor to the Super W, came with the reminder that she was a development player.

She was told to not expect much game time.

“I was just rapt to be there. We won that year. I came back next year and made a pact with myself. I wanted to be a starting player. I earned my start jersey. Then I thought, ‘I want to be a Wallaroo.’ I started to find my groove where I felt I could make an impact.”

An ACL injury forced Naiqama to miss most of the 2018 Super W competition.

But in 2019 she earned a Wallaroos call-up after starring for the NSW Waratahs in their second Super W title win after the grandfinal at Allianz Stadium.

As victory celebrations went from the Sunday night well into Monday, Naiqama recalls: “Everyone was getting calls telling them they had either been selected or dropped. I was constantly checking my phone, my emails, going to the bathroom to check. I didn’t get anything.” Accepting ‘it’s probably not meant to be,’ she returned home, then in Campbelltown.

She was seated on the couch in her pyjamas, eating orange cake made by her auntie when her mobile phone rang.

“The first thing I hear is, ‘Hi Sera, it’s Dwayne Nestor, Wallaroos head coach. How are you?’ she recalls.

“I had goose bumps. He was, ‘I’m so sorry for how long it’s taken me to call you. I’m calling to congratulate you on making the PONI squad,’ … a ‘player of national interest’ squad. I didn’t say anything. I was sitting there with tears streaming down my eyes.”

The real challenge still awaited. First, she had to earn selection in the Wallaroos squad for the two Test series against Japan and New Zealand.

Then she had to make the Test sides.

“While it was amazing to be part of the PONI squad, the work was to be selected to go on tour.”

She made the squad, but was “heartbroken” when she missed out on a dream debut selection in the Tests.

Still, the honour of wearing the Australian jersey in a game for the first time came with selection in the Oceania Championship.

Challenges of a COVID world

COVID stalled Naiqama’s hopes of a Test and those of all the Wallaroos.

They were left with no option but to train within strict protocols for the revised Super W season not knowing when they would play again.

COVID’s impact has been felt beyond the match calendar.

It has impacted the Wallaroos planning and preparations, including a scheduled training camp that was to have been held in December but has now been deferred to January.

However, it is not just women’s rugby that has suffered.

So many levels of rugby have been hurt by COVID.

Naiqama certainly appreciates the work of RA and RUPA to steer the code through COVID and establish a way forward as borders opened up across Australia and around the world.

“Hopefully now we can see the light at the end of the tunnel and create schedules with some confidence,” she says.

Naiqama’s focus in rugby is now on the Pacific Four Series and then the World Cup in October, 2022.

However, still important is that she maintains her balance in life outside of the game.

Now living in Wolli Creek to be closer to her work and the Wallaroos’ training base at RA at Moore Park in Sydney’s eastern suburbs, Naiqama also has a career in communications and marketing.

With a Diploma in Tourism, Diploma in Human Resource Management and Diploma in Marketing, she works for Sydney Uni Sport & Fitness as senior marketing and communications co-ordinator.

She also has her own blog, Serasituations, and co-hosts That Pacific Sports Show on ABC TV with retired Wallaby and Waratah Tatafu Polota-Nau and the Can You Be More Pacific podcast with former NRL player Dene Halatau at ABC Radio.

She also works for Stan Sport as an expert rugby panellist.

When it comes to balance between women’s and men’s rugby, Naiqama says: “I’m satisfied, but I’m not content.”

“We’ve got some way to go” and many will agree with her.

However, she does recognise that inroads have been made by RA and RUPA to develop women’s rugby.

Improved conditions for women players were a feature of the 2018 Commercial Bargaining Agreement that came into effect on January 1, 2018 – such as pay parity with a base, entry-level full-time wage for men and women in Sevens rugby, a Pregnancy Policy that allows for maternity leave; and match payments and squad assembly fees for the Wallaroos who effectively operated as semi-professionals.

Naiqama says: “If I compare where we are to where we were when I started at Sydney University … Listening to girls say they would [use] left over gear given by the men’s club to where we are now … we’ve come on leaps and bounds.”

“The strongest example would be the treatment we get at the New South Wales Waratahs.

“Remembering four or five years ago we played for Sydney, we used to have to pay to play in that [nationals] tournament. We had to pay our way.

“Now we have the Super W tournament. We get access to resources. We have uniform providers, don’t have to pay to travel and play.

“There are little wins we didn’t have less than 10 years ago. If we keep heading in this direction … I want organisations to continue making consistent improvements.”

But right now, her biggest wish is that she can play again!