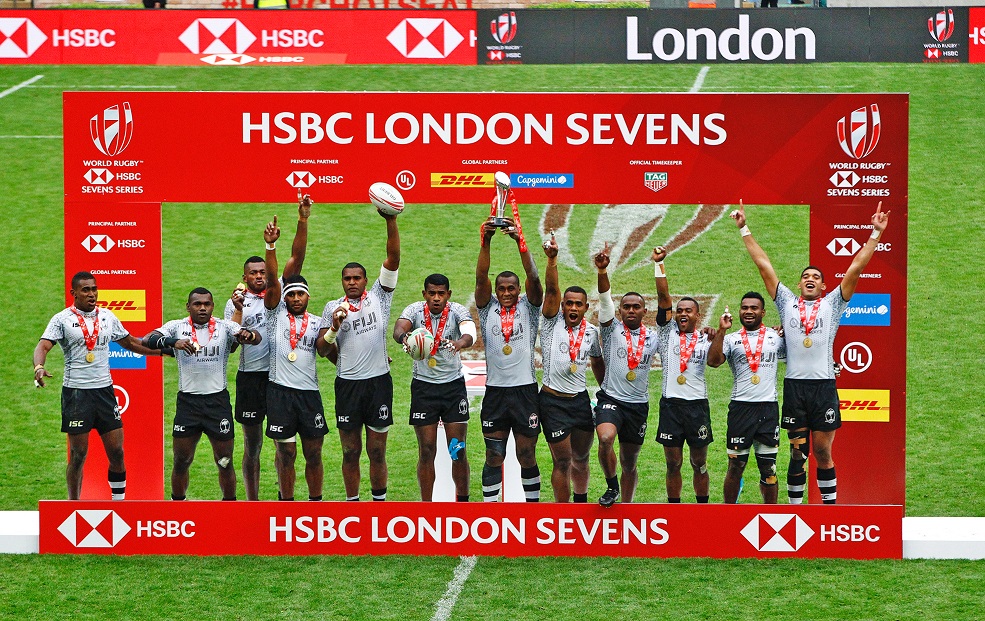 WHAT a day. What a final. What supremely talented rugby players Fiji has.

After a difficult first day at the HSBC World Rugby Sevens Series’ London 7s, the Fiji Airways Fiji 7s team lifted its game on Sunday to a supreme level, annihilating Australia 43-7 in the cup final after knocking out Series rivals USA in the semis and upstarts Ireland in the quarters.

The tournament win – Fiji’s ninth title in the last 16 events – puts Gareth Baber’s boys at the top of the standings, two ahead of the USA with one week to go.

“I know that it’s only half a job done,” Baber said.

“We need to do what we didn’t do last year (when South Africa snuck in to take the series) and finish things off in Paris.

“We’ve learned from that; we’ve talked about it so it doesn’t sit as a ball and chain around our ankles – it inspires us to go and deliver next weekend.

If we can get close to how we played today, then we won’t be far away from it.”

And Baber was quick to give credit where it’s due.

“This is the end-product of two and half years of work. Really, it’s a big congratulations to everyone involved, including all the staff at FRU back in Fiji.”

Perhaps more important than the final victory itself was the tense 17-10 defeat of top dogs USA in the semi-finals.

“You’re competing with the team that is directly above you in the standings and you’re chasing their tail at that stage. That was the motivation for us. We knew we had to put pressure on them. You can’t give them space and time on the ball and yards up the field… they’re big men, big runners with a lot of pace. I was really pleased we were able to put that performance in then carry it on into the final.”

Against Mike Friday’s USA side, Fiji produced some scintillating rugby to lift their game to the heavenly version that we all know so well.

After Saturday’s ups and downs, Baber’s team found their rhythm to defeat the table-topping Americans with speed, guile, inventiveness and outstanding team play.

Fiji bustled, harassed and rucked their opponents with renewed energy and focus. Superstar Perry Baker and some of his team-mates were rushed into mistakes, knock-ons and inaccurate passes.

Fiji’s commitment was exemplified in the opening exchanges by the smallish Aminiasi Tuimaba who stopped the US juggernaut Danny Barrett in his tracks, even bumped his backwards.

Tackles like that can put hesitation into the heads of opponents, and this no doubt played a huge difference in the outcome of the match.

The USA started strongly, winning the kick-off then hanging onto possession for two minutes until Martin Iosefo touched down for the opening points.

But Fiji responded with one of the best team tries of the weekend as Tuimaba finished off a sweeping move that began with a Tuwai line-break and included a sublimely innovative pass ‘under’ a USA defender.

Fiji lost the restart again but some determined rucking from Vilimoni Botitu got the ball back and tightened the screws.

Underlining the team’s supreme confidence was Waisea Nacuqu’s unusual decision to take on Baker around the outside.

The Fiji playmaker was running right to left looking to offload, but then just went for it to surprise Baker.

Unfortunately, the Westfield man switched the ball into his left hand at the very last moment and was adjudged by the TMO to have brushed the in-goal touchline by millimetres before touching down.

“There is an inherent nature of Fijian rugby which is high risk,” Baber explained.

“I’ve heard some of the commentators talk about our errors, but we look at those and balance against the wins we get because of the way we play the game.

“Ultimately, it’s creating that space in the heads of the players so they don’t dwell on any mistakes.

Sometimes, when the boys play like that, they don’t even notice that there’s a risk attached.”

So 7-5 to Fiji at half-time it was, and with all the initiative in the white corner.

Two minutes into the second half, Meli Derenalagi reached the corner fractionally before his marker and again the TMO was
asked the question.

This time, it was clear the Fiji forward had grounded the ball in the nick of time before being bundled into touch.

Indeed, a game of millimetre margins.

Leading 12-5 and looking relatively comfortable, USA halfback Kevon Williams surprised the Fiji defence by taking a line-out in his 22, receiving the pass from the top, then galloping around the forwards and past Tuwai to charge in from 80 metres.

Though beaten for pace, Tuwai did push the American wide to make the conversion harder and duly kept the score to 12-10 in
Fiji’s favour.

Fiji then had two minutes to hold on.

And they did that with panache, staying on the front foot and producing another excellent team try on the final hooter to send Fiji into their fifth final of the season.

And in the tournament showpiece, Fiji was simply in a class of their own.

“Some of the offloads in that final, the speed of hand, control of the ball under pressure, this is the way these players grow up
playing rugby from the age of 4 or 5.

“You don’t want to have errors in your game, but the game of rugby is about the people who can react  to those errors, who
can manage those errors, manage risk under the most extreme pressure like we did against people of different shapes, different
shapes, and different paces.

“It was just beautiful to watch. It’s the first time in a while that I was able to sit back with about three minutes to go and enjoy myself.”

The cup quarter-final with Ireland was certainly the ‘battle of the restarts’ – such a crucial part of game.

Ireland won the first  three and that led to two tries and a 12-0 need.

Three full minutes passed before Fiji got their giant mitts on the ball, but then their natural game kicked in and they scored 21 unanswered points before the interval.

Tuwai, the little magician named on the big screen at half-time by Ben Ryan as the ‘greatest player he had ever coached’,
finally claimed a defensive restart at the fourth time of asking.

Fiji spread the ball wide to Tuimaba who made good ground before passing back inside to Tuwai and then over to Derenalagi
to finish off the move.

Tuwai featured in Fiji’s second try when he produced another important turn-over on his own 22, fed the ball to flying forward
Sevuloni Mocenacagi who looked like he would sprint 80 metres to score, but as he was being chased down by the Irish
cover he threw an extraordinary Hail Mary pass inside for Tuimaba to score under the posts.

And just before the halftime hooter, Fiji forced another turn-over deep inside their own half and none other than Tuwai
himself raced away untouched to score from great distance.

Is there anything he can’t do? Botitu had the honour to get the second period under way.

He kicked it high and wide; Josua Vakurinabili climbed up to bat it back across the field and Botitu himself gathered and
charged through to score.

As on Saturday against France, when Fiji got their restarts right, it all looked so smooth.

But Ireland, with such little experience at this level, showed they will surely add a new factor to the series next year when
they came hurtling back at Fiji, scored two quick tries to get within four points at 28-24 before substitute Asaeli Tuivoka put
the game beyond reach with a long-distance try on the hooter 33-24.

“The Irish Rugby Union have shown the way in developing a 7s rugby programme,” Baber said.

“Three years ago they were building and narrowly missed out a couple of times on promotion onto the Series.

“Now they are there, and they are showing their qualities. They have good rhythm – they attack hard, they’re physical,
and they showed us their aerial skills as well.

“I think they’re going to be a definite force next season.”

The organisers gave Derenalagi the HSBC Player of the Tournament award.

But in reality they could have chosen any of the Fiji boys – Tuimaba for his three first-half tries, Tuwai for his excellence all
around, Vakurinabili for dominating the restarts, or even second half substitute Alasio Naduva for injecting even more pace
into the game and scoring two tries in a minute.

This was a magnificent team effort, and one that those present at Twickenham will remember for many a year.