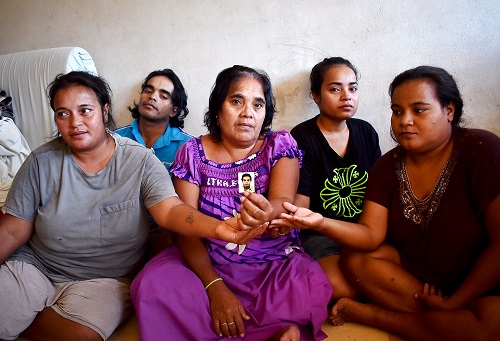 A SEAMAN who spent half his life on the ocean died trying to save two children from the very element that he grew up loving.

Tebaio Tionikai drowned at Natadola Beach in Nadroga on Saturday afternoon after the rescue attempt in strong currents.

The resident from Natabua, Lautoka, was on a picnic trip with his Rabi Methodist Church members when he heard the screams of the young boy and girl.

According to witnesses, the 26-year-old sailor swam out to the children who were also being rescued by other church members.

Younger sister Kirikara Tionikai said by the time her brother swam out to where the two children were, other church members had managed to rescue the pair.

“He was swimming against the current so it was very hard for him to get to them,” she said.

“He couldn’t get to them and fortunately someone else did.”

She said knowing that the children were safe, Mr Tionikai then tried to swim back to shore.

“I think that is when we knew that he was in trouble.

“He just went down and people could not see him anymore.”

She said their church members alerted police and staff at the InterContinental Fiji Golf Resort and Spa.

“It was a two-hour search and I believe police found him a few metres away from where the group was.”

According to police, the victim was pronounced dead at the Sigatoka Hospital.

The second youngest of eight siblings, Mr Tionikai was described by his sister as a loving and caring person.

“He had a lot of friends and was someone that liked to be around people,” Ms Tionikai said. “We still can’t believe that he is gone.”

The national death toll from drowning stands at 20 compared with 25 for the same period last year.