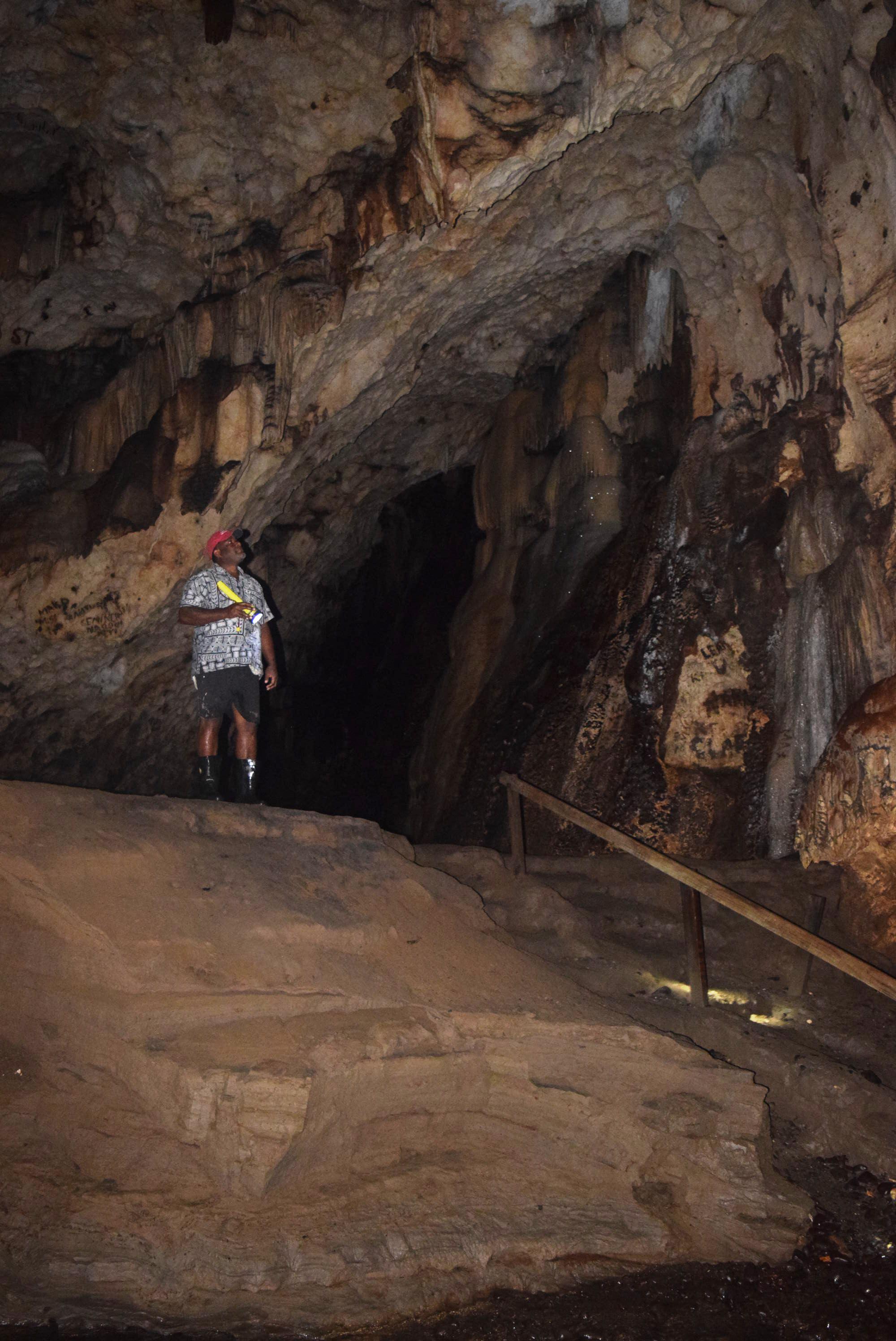 Vilimoni Valanavanua stands on top the boulder which acted as a ritual platform. Picture: MATILDA SIMMONS

IF you travel towards Sigatoka Town from Suva, just before the bridge you’ll see a road that leads off to the right – Kavanagasau by name.

Follow it for about 10 to 15 kilometres (as the road turns) and you’ll leave the wide meandering Sigatoka River and ascend to the roof of the Sigatoka Valley.

The colour of the foothills is in stark contrast to the lush verdant green of the valley floor – a dry, dusty brown as if the sun had come too close and singed the earth.

Driving along the top of the foothills is an experience in itself; you are exposed to sweeping panoramic views of the valley, left and right.

Every now and then, either poignant solitude or in a forgotten part of the foothills, there is an almost unreal quality about the valley; time seem to come to a stand-still up here and if you’re not lulled out of the reverie, it will seduce you.

Nature is the undisputed king.

But deep within this mysterious valley and rolling mountain ranges are ancient oral stories that tell of tribal warfare and mythical, legendary figures weaved into iTaukei culture for many generations.

We were making our way up to the foothills of Kavanagasau to explore the famous Naihehe caves famed for its role in the historic “Little War of 1876” and a cave fortress to one of Fiji’s last cannibal tribes.

According to folklore, it was ruled by a bete (priest) and the high chief of Sautabu village whose people would often hide inside the caves for months at a time during tribal warfare.

The name of the cave Naihehe (or Nasese) in the Nadroga dialect means to confuse or cause confusion.

According to Vilimoni Valanavanua, who took us inside the caves, the enemies of his ancestors would get confused when they approached the mouth of this cave or get lost in the forest while searching for them.

It is known by the people, that whoever wishes to enter the cave must seek the permission of the priest (bete), or you might get lost when you enter.

Luckily for us, Vilimoni comes from a line of the bete clan and we were fortunate to get approval. Vilimoni serves as a tour guide for many visitors wishing to catch a glimpse inside the caves.

He accepts their sevusevu inside a concrete house built a few metres away from the caves before he takes them up.

It has helped in my clan’s financial obligations. I am happy that foreign tourists are willing to travel right up here to learn about our history,” he shares.

“The visitors love it here … they say Fiji is rich in resources including our culture and heritage,” he said.

“Since we opened it up as a tourist destination, there have been no mishaps at all. The gods approve,” he smiled.

Vilimoni hails from Sautabu Village, tikina Naqalimare, Navosa. He is proud of their natural heritage and its links to his people. He says only one wedding was performed inside the cave since they opened it up for tourism.

“The groom’s father had maternal links here which is why we allowed it,” said Vilimoni.

“He came down from Scotland with his European wife. It was a unique wedding with over 300 candles lit up all over inside the cave, it was quite a sight,” he said as we made our way to the mouth of the cave.

Before the natural fortress characteristics of the Naihehe cave, it was easy to see why the people of Sautabu and their neighbouring allies were able to stave off attacks.

The mouth of the cave prevented the attackers from entering on masse, and the clans were able to successfully defend themselves from many enemies.

We follow the lantern-lit hall chambers to the legendary “pregnancy gap” which opens up into the huge and wondrous
Grand Cathedral Chamber.

According to Vilimoni the ‘pregnancy gap’ or ‘dre na bukete’ makes it difficult for women who are pregnant and knowingly hide it, from crossing through.

“The caves played a role in two historic wars in old Fiji. One it was fought for the church and secondly for the land and the vanua. In the war of the church, our chief at the time did not accept Christianity after the na kalevu (the paramount chief of
Nadroga) commanded all his people to become Christians.

“But after the terrible spread of the measles which killed most of our people, our chief decided to go back to their pagan
practice. This resulted in the war between the British colonists and the interior people.

“Our province was actually the last to accept Christianity as this cave was where they worshipped as well. There is a place
in the cave called ‘I ra na Bati’ where four bati or warriors stand guard at the mouth of the cave and inside so it was really difficult for enemies to penetrate it.”

The cave has several compartments inside.

As we walked deeper into the second compartment there is a seating above known as a meeting place, the chief would sit at the top and his people at the bottom.

If someone did not follow the law of the cave – he or she would be beaten and destined for the pot.

“If the chief orders him to be buried alive it will be done or for the pots then it will be carried out,” said Vilimoni.

The cave opened up into a huge chamber that reached nearly three stories high.

Inside it was dark as night; you couldn’t even see your hands in front of you. We had to use a powerful torch to get lighting.

Upon entering, we were awestruck at the natural colour of rocks before us, it had sparkling stalactites, stalagmites, flowstones
and underground springs.

We came upon a stream which was used by the children and the women to bathe in, in the old days.

At one stage it housed more than 200 people at one time.

Several compartments inside the cave served a purpose – a ritual platform, priest chambers and a cannibal oven.

There was even a natural forming stalactite that took a form of a woman lying head down. According to Vilimoni their ancestors
took this for their ancestral female goddess and it was worshipped ritually.