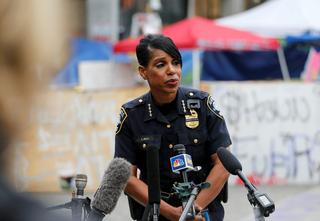 SEATTLE (Reuters) – Seattle Police Chief Carmen Best resigned on Tuesday, a day after the city council cut her department’s budget as part of a reform movement following mass protests against racial bias and violence in policing.

Best’s surprise departure marked one of the most notable big-city police department shakeups in the aftermath of nationwide demonstrations spurred by the May 25 death of George Floyd, a Black man, who was pinned under the knee of a white Minneapolis police officer.

Graphic video footage of the fatal encounter stirred a public outcry against heavy-handed police tactics and racism within the U.S. criminal justice system, triggering months of street protests in cities across the country amid the coronavirus pandemic.

In Seattle as elsewhere, much of the anger evolved into demands by some civil activists to “defund,” or radically scale back, police departments in favor of greater spending on social services.

“Out of this challenge will spring new hope for a better future for all,” Best said at a press conference on Tuesday announcing she was retiring after two years as Seattle’s top cop. She joined the department in 1992. “I trust everyone will find a way to work together and put aside personal conflicts, political grandstanding, and power plays.”

Best, 55, cited the council’s decision not to consult her more thoroughly ahead of the cuts, which will force the layoff of about 100 officers, as a major factor in her decision.

The Seattle City Council on Monday voted 7-1 to reduce the police department’s budget by $3.5 million, less than 1%, for the remainder of the year while investing $17 million in community safety programs.

Defunding advocates have pointed to a growing militarization of law enforcement, even as police officers are increasingly called to deal with issues, such as addiction, mental illness and homelessness, better addressed by social services. Opponents say cuts in policing threaten public safety.

Sharpening his law-and-order message ahead of the Nov. 3 national elections, President Donald Trump has cast the defunding movement as a reckless goal of his political adversaries.

At a White House briefing on Tuesday, Trump praised Best for doing “a very good job,” adding, “I think Seattle has made a tragic mistake.”

“It is clear from the public statements of Chief Best that these pay cuts to her and her team weighed heavily in her decision to leave public service, and it is a significant and sad loss,” said Councilman Andrew Lewis, who voted against the cuts.