The tragic journey that claimed 21 lives 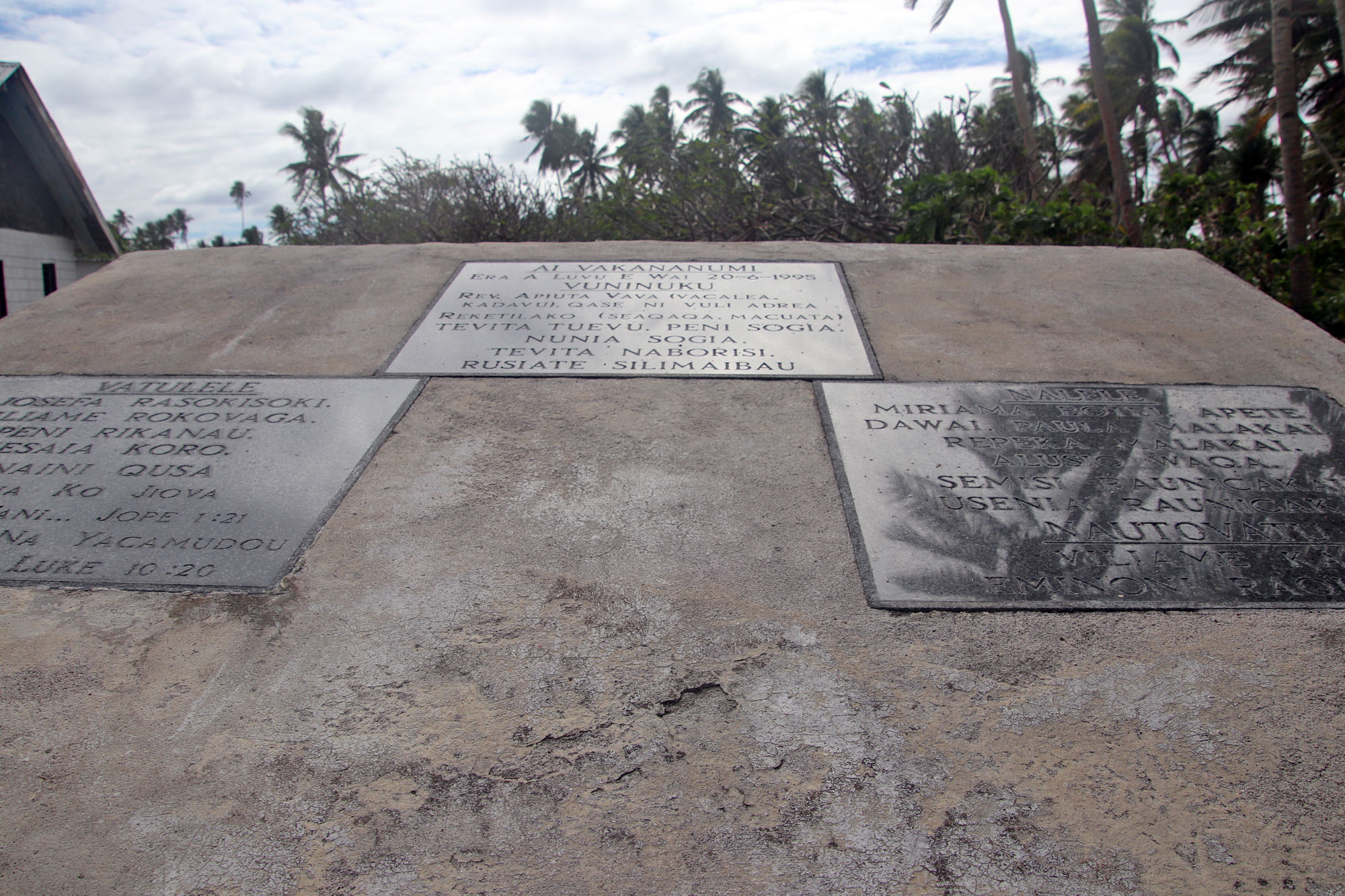 A closeup of the plaque bearing the names of the 21 people that perished during the incident. Picture: LUKE RAWALAI

LABELLED as one of the worst sea mishaps in Fiji’s maritime history, the mass drowning of 21 people on a trip from Cikobia to Vanua Levu is almost forgotten history now.

However this is not true for people in the four villages on the island who lost their dear ones during the fateful incident which happened on the 20th of June 1995.

Above all the sea mishaps only survivor Toloi Rasaivanua will probably take the memory of the fateful day to the grave with her especially the extra ordinary feat of swimming for dear life for two days and a night in the choppy Udu waters, North East of Vanua Levu.

Originally a native of Vatulele village on the island, Ms Rasaivanua lost her husband, sister, brother-in-law and other relatives during the incident.

Everytime she talks about the incident, Ms Rasaivanua trembles as she can still picture the preparation that took place in the village as they prepare for the journey to attend a church bazaar in Labasa.

Aged 40 years when the incident happened, Ms Rasaivanua said she will never get over the sound of the waves hitting the boat as women children wailed while the boat swayed in the swelling waves.

On the 17th of June 1995, Ms Rasaivanua and 20 of her relatives left Cikobia on the fateful trip bound for Labasa.

“We departed the island at around 9.30am that Saturday morning following after a second boat that had also taken villagers also bound for the same event, “she said.

“The sea was a bit choppy and the boat we were on was really full because it was carrying 21 villagers.

“A few hours out into the open sea, as we lost sight of the island, disaster struck.

“All I remember is three waves hitting the boat consecutively before the boat capsized among the wails of men and women.”

Ms Rasaivanua said luckily there were those on board the boat that remained in control even after disaster struck advising the other villagers to remain calm and for them to stay together huddling beside a piece of the boat that was still afloat while the remains of the vessel was submerged.

Those that could find pieces of container and other floating objects from the boat were advised to grab onto it and keep afloat.

Counting herself lucky after finding a piece of plastic gallon floating close to her, Ms Rasaivanua grabbed onto to it using the object as a floater.

After waiting for aid for a few hours as the captain had advised all villagers, Ms Rasaivanua knew help was not coming any moment soon.

“I regained myself and told the people I was willing to swim to the nearest land as Vanua Levu was now visible on the horizon to get help for my people knowing that we had no hope as there was no forms of communication let alone a mobile phone,” she said.

“Despite the pleadings of the captain and her relatives Ms Rasaivanua left and this time she was accompanied by her late husband, a school teacher from Seaqaqa who was teaching at the island school and her sister in law who all felt sorry for her.

“As we approached Druadrua waters we could spot a boat far off in the distance and so the teacher, Adrea Rekitilako decided to swim towards the boat while I remained firm about getting to land.

“My husband chose to remain with me including my sister in law who we continued swimming with, but on the second day of swimming as we reached a spot close to the reef the two both got bitten on the wrist by some kind of fish and as they were bleeding heavily, I tied their wrists together to stop the bleeding.”

At a point Ms Rasaivanua’s husband and his sister grew weak and despite her pleadings to carry on swimming since it was getting dark and they were still out at sea, the duo wanted to take a rest.

Worried about the future of their four children, her husband then asked Ms Rasaivanua to continue to land as the three separated.

Darkness approached and with it, Ms Rasaivanua grew weary as she had been swimming for two straight days.

“When I thought that I could not carry myself anymore, my foot touched coral and sand and this gave me hope so I floated with the container letting the waves carry me to shore,” she said.

“Since it was dark, the waves carried me right to what I thought was the shore but when I reached dry land I could still see the seashore further away and I realised that it was low tide and I was way out in the low tidal mark.

“I did not have any ounce of strength left in me by this time and so I crawled keeping my eyes and ears open for any human sounds.

“As I reached a point I could notice a white object moving further in front of me and so I followed it later figuring out to be a dog.”

At some point during the long crawl, Ms Rasaivanua lost sight of the white object but it always reappeared keeping the same distance before her.

“Despite the pain and my bleeding knees I made it my business to reach the light,” she said.

“My heart finally found hope when I heard human language and I knew I was alive now.

“Since I was too tired to crawl up the doorway of the house I tried with all my effort to at least poke my head through the doorway for people to see me and I know for a fact that the sight of me would have given a heart attack to the poor woman that had just finished washing their dishes after dinner that night.

“The woman in the house wailed in her fear as she saw my face peering at her from the doorway she asked me ‘Tamata se tevoro (are you human or a demon)’.”

Ms Rasaivanua later learnt that all that accompanied her on that fateful trip had died and that she had landed at Nukusa in Udu.