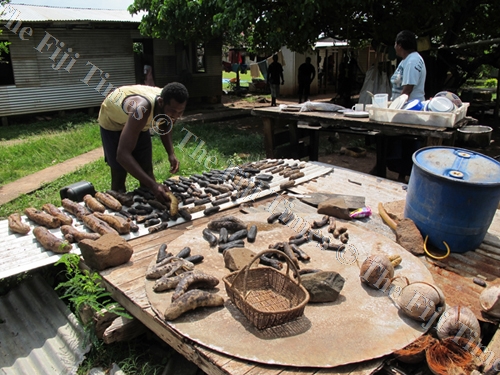 Ministry of Fisheries says it will review the ban on exploitation of beche-de-mer in May 2022. Picture: FILE

SEA cucumber stocks in Fiji’s waters continue to diminish at an alarming rate forcing the Ministry of Fisheries to develop their own beche-de-mer (BDM) nurseries in Daku, Tailevu, to replenish stocks within waters around the country.

Minister for Fisheries Semi Koroilavesau said the aquaculture nursery in Tailevu was supplying juvenile sea cucumbers within the waters of Bua and Cakaudrove in a desperate effort to replenish stocks in the two provinces.

Mr Koroilavesau said the decision to ban the exploitation of the marine organism was one backed by research which showed that stocks of sea cucumbers have reached a critical level and that if nothing was done it would become extinct.

“Sea cucumbers have specific functions in the ocean and their extinction could wreak havoc in our marine ecosystem,” he said.

The ministry’s research officer Tevita Vodivodi said recent sweeps in the Northern and Southern Lau groups indicated that the stocks of A-grade sea cucumbers, which included the white and black teat fish, had been over exploited.

Mr Vodivodi said A-grade species could now be accessed within 40 to 30 metre range of water which meant divers had to go to the deep to procure these species.

“The serious concern that lies within the ministry is the catastrophic repercussions that will arise when these deep sea stocks known as the parent stocks become extinct considering their functions of replenishing stocks on the reef,” he said.

“It would mean that our stock of sea cucumbers would head for a gloomy future and not only that the effect it would have on the balance of the marine ecosystem is serious.

“These sea cucumbers like parrot fish are filter feeders and they cleanse sand and also prey on starfish, crustaceans and fish in both shallow and deep waters keeping their populations in check.

“Apart from these functions sea cucumbers also assist in the aeration and breakdown of stratified muddy and sandy sediments reducing micro algae biomass and algae blooms.”

Mr Vodivodi said at this stage waters in Bua and Macuata were the only areas where stocks were not at a critical low.

“Through a Value Chain Analysis of the Sea Cucumber Fishery in Fiji it was revealed that fly by night operators are now targeting resource owners directly with promises of developing their people to access their marine resources,” he said.

“This is why we are advising resource owners to seek advice from the ministry with any development plans within their fishing grounds.

“However, at this stage there is still a chance of reviving our BDM stocks and currently the ministry is also working with fishermen through post-harvest workshops to ensure that they process BDMs to standard so they get the real value of their resources.”

Meanwhile, the value chain research undertaken by Wildlife Conservation Society and the ministry revealed that in 2015, there were 13 export companies in Fiji that traded sea cucumbers, of which seven were interviewed.

Despite the increase in the number of exporters from seven to 15 from 2008 to 2014, only seven have remained active in the past eight years.

“Based on information provided on the number of shipments made per year, and the quantity of sea cucumbers per shipment, annual export volumes were calculated to be in the order of 978.2- 1405.7 tonnes.

“This is at least 21 to 31 times higher than that recorded in Department of Fisheries 2015 export data and 4.6 times higher than has been documented in recent years suggesting that export records may not be a true reflection of the quantity of sea cucumbers being exported from Fiji.”

The survey concluded sea cucumbers were a high value export fishery, which has historically been unmanaged and threatened with over-exploitation in Fiji and throughout the wider Pacific.

“Prices are driven by Asian consumers who have specifi c species, size and quality preferences, which with the exception of exporters, is largely unknown to other players in the value chain,” the survey found.

“The increasing trend in the global market prices for sea cucumbers and the failure to aquaculture sea cucumbers species at a commercial level means that this fishery will rely on wild caught animals and will continue to crash, unless effective measures are put in place both nationally and
globally to prevent this.”