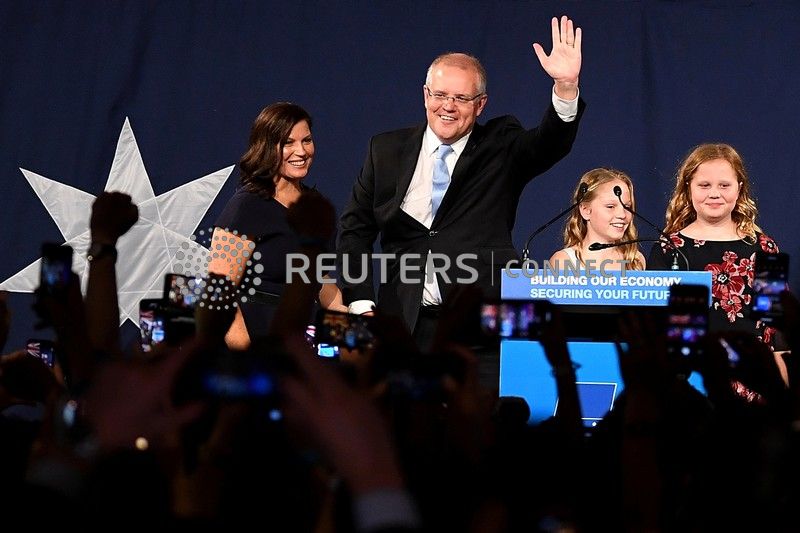 CANBERRA, 20 MAY 2019 (ABC NEWS) – Scott Morrison is preparing a new-look frontbench as Labor grapples with who will lead the party after its shock election loss.

The final outcome of the election remains unclear but the ABC election computer is currently projecting the Coalition winning 75 seats, Labor winning 65, six shared among independents and five to be decided (as at 4:00am).

The Prime Minister faces a difficult balancing act, thanks in part to the exodus of senior ministers from his Cabinet who retired at the election.

Those that stuck with the Coalition are already jostling for promotions, with Queensland and Tasmania hoping to gain a boost in Cabinet as a reward for the electoral gains in their states.

Labor, meanwhile, has started looking for a new leader after Bill Shorten announced he would step down from the position.

Former deputy prime minister, Anthony Albanese who failed his bid to lead Labor in 2013, has declared his candidacy and deputy leader, Tanya Plibersek said she is considering her options.

As the Labor leadership discussion begins, there’s another discussion taking place about why the party lost what has been dubbed the unlosable election.

Labor frontbencher Joel Fitzgibbon has urged a change in direction, saying the party has tracked “a bit to the left”.

He suffered a 10 per cent swing against him in the New South Wales seat of Hunter, which has a large mining community.

“The Labor Party must reconnect with its blue-collar base and get back to the centre and be less ambitious in its pace of change,” he said.

“People are inherently conservative in Australia and any change has to be orderly and steady and needs to be explained to people.”

He said Labor was punished because Australians did not understand their policies and instead took what they considered the safe option and voted for other parties.

The Coalition needs 76 seats but has to appoint a speaker. Falling below 76 would mean he would need crossbench support to pass Coalition legislation.