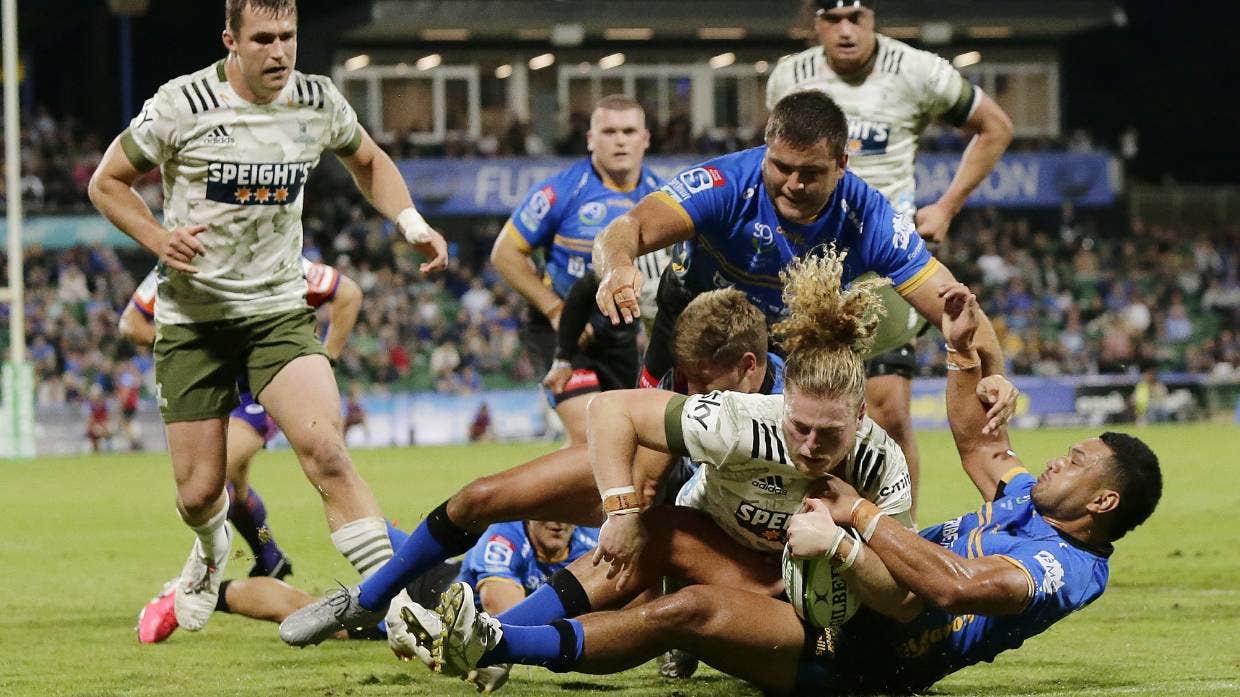 Scott Gregory scores the Highlanders’ third try against the Force in Perth on Friday. WILL RUSSELL/GETTY IMAGES

The Highlanders have won two successive games for the first time in two years after a couple of tries from in-form midfielder Scott Gregory helped them to a tough 25-15 win against the Western Force in Perth.

However, they didn’t make it easy for themselves and a wobbly spell either side of halftime assisted a dogged Force side, who simply refused to lie down throughout the 80 minutes.

A late Force try also denied the Highlanders a potentially crucial bonus point, and coach Clake Dermody admitted afterwards that was “pretty disappointing” given the strong position the Highlanders had put themselves in.

“We didn’t start the second half that well but we’d managed to get ourselves back in the game and get three tries up,” Dermody said.

“It was a bit frustrating, but the Force are a good team. We came over here with respect for them, and we really wanted to prepare well.

“But not being able to finish that game is obviously a work-on.”

Leading 20-10 at halftime, the Highlanders started the second spell with a series of errors and the Force’s belief levels began to grow.

As the pressure mounted, it took crucial turnovers from flankers Hugh Renton and Shannon Frizell to keep the Australian side at bay in front of a sizeable and parochial home crowd.

Renton then copped a swinging arm from Force replacement prop Greg Holmes, with the former Wallaby sent to the sin bin midway through the second half.

It proved to be a key moment in the match. From the resulting penalty, the Highlanders kicked to touch and after the forwards had gone close to the line sharp skills from Aaron Smith and Mitch Hunt set up Gregory to dive over from close range.

That gave the Highlanders a 25-10, four tries-to-one cushion, but their hopes of collecting the bonus trip from the long trip to Perth disappeared when the Force scored with just two minutes to go.

Smith, Frizell, Gregory, Nareki and veteran lock Bryn Evans were among the Highlanders’ best, while replacement Kazuki Himeno added a huge amount of energy when injected from the bench in the second half.

Gregory’s two-try night will be a source of satisfaction for the Northland product, who continues to reap the rewards for a standout couple of months during which he has developed into one of the Highlanders’ most reliable performers.

Dermody was also pleased with the Highlanders’ ability to outlast an opponent they knew would challenge them at times.

“Our work-on for the year has been consistency,” he said. “To be able to come over here after 20 hours of travel, prepare well and put away a team that plays 80 minutes of footy…I’m pretty happy.”

The Highlanders were forced into a late change after fullback Sam Gilbert was ruled out with a hamstring twinge in the warmup, with Josh Ioane starting in the No 15 jersey and James Lentjes taking a spot on the bench.

That was an unwanted disruption and the Highlanders also had to dig deep on defence at times, an ability that pleased Dermody and hinted at the side’s growing maturity.

“What we’ve really grown is our mentality for the game,” he said. “The preparation that we had was pretty light, so we didn’t really test ourselves physically.

“But I know the boys were full of respect for the Force during the week and that showed in their preparation and attitude in the game.”

Dermody picked out Nareki for a second week of strong work on both sides of the ball, noting that he had been working diligently with defence coach Shane Christie to harden up the Highlanders’ edge defence.

Nareki was also lively on attack, and he grabbed the first try of the game after 12 minutes.

From a slick lineout move, Smith made the initial break and then fed Nareki with a short pass and the wing ran over for the try.

Recalled flanker Frizell made his presence felt in the opening quarter, making several powerful runs, while No 14 Sio Tomkinson was also at his physical best.

Force No 10 Jake McIntyre had to be replaced after 21 minutes following one aggressive Tomkinson carry, with the playmaker clearly concussed after a heavy head knock.

Dermody had also made an effective tactical switch for the restarts, which were poor against the Reds last week, by positioning experienced lock Evans on the right-hand on the paddock instead of Pari Pari Parkinson.

Evans was rick solid under the high ball, meaning the Highlanders could exit effectively after scoring points.

“You can’t buy that experience,” Dermody said of the evergreen former All Black. “He’s been really good for our young locks as well.”

Gregory collected the Highlanders’ third try after 36 minutes, but the Highlanders were then guilty of switching off just before halftime as Pumas No 9 Tomas Cubelli finished off a rare Force break to narrow the score to 20-10.

That was a poor reward for the Highlanders’ dominance but they steadied the ship at the three-quarter mark and will head to Queenstown in good spirits to face the Rebels next weekend.