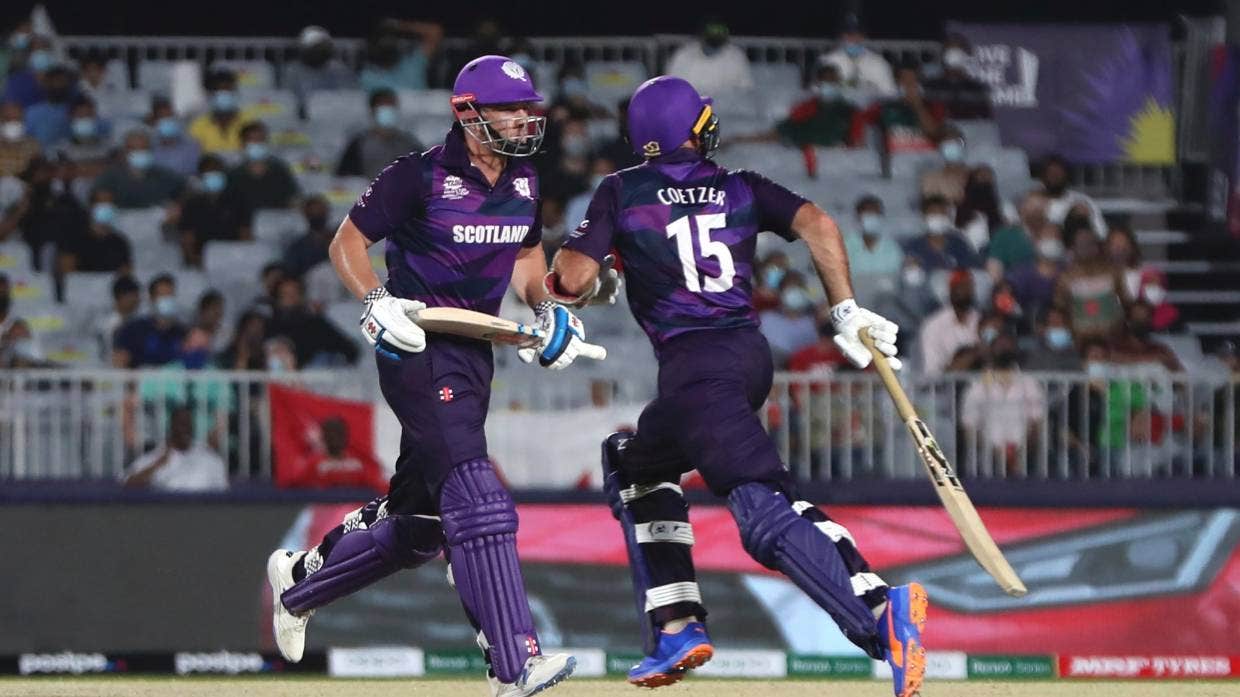 Scotland recorded their third successive victory and advanced to the next stage of the T20 World Cup with a resounding eight-wicket win over co-hosts Oman on Thursday (Friday NZT).

Earlier, Bangladesh beat Papua New Guinea by 84 runs to finish behind Scotland in Group B and also advanced to the Super 12.

Oman, who needed a win to eliminate Scotland on net run-rate, were bowled out for 122 after their key batsman Jatinder Singh was run out in the very first over.

Opening batsman Aqib Ilyas top-scored with 37 and captain Zeeshan Maqsood made 34 but the rest of the batting lineup struggled against the Scottish pace and spin.

Captain Kyle Coetzer (41) then led the run-chase by hitting three sixes and two fours as Scotland, which upset Bangladesh in the first match and also beat Papua New Guinea, reached 123-2 with three overs to spare.

“It’s a great feeling,” Coetzer said. “We will go into every game full of hope and belief that we can win more games. Look for match-winning contributions, as well as significant contributions.”

Richie Berrington (31 not out) finished off the game in style by hitting a four and a six to Mohammad Nadeem as Oman bowed out of the event with a solitary win against PNG.

“It’s a chance that we have lost, but we will come back,” Maqsood said. “It was a short total … [but] happy with the way the boys played.”

Shakib Al Hasan produced an impressive all-round performance as Bangladesh sealed a spot in the Super 12 with a big victory against Papua New Guinea.

The Tigers, who lost their opening match against Scotland, backed up their vital victory over Group B hosts Oman with an 84-run success against tournament debutants PNG on Thursday (Friday NZT).

The scale of the victory boosted their net run rate to the extent qualification was assured whatever the result of Oman v Scotland later on Thursday. An Oman win would leave all three sides on four points apiece.

Mohammad Saifuddin ended with 19 not out after hitting the last three balls of the innings for 16.

PNG began cautiously, reaching 11-0 off 15 balls, but then wickets began to tumble. By the end of the fifth over they were 14-4 and the tie was effectively over.

However, the sixth wicket had brought Kiplin Doriga to the crease. Swinging freely he scored exactly as many as all his team-mates combined, thumping 46 off 34 balls.

The wicketkeeper, who was 26 on Monday, was one hit away from a half-century when the final wicket fell with three balls remaining and PNG dismissed for 97.

“Now the pressure is gone and we can express ourselves and play with more freedom,” said Al Hasan, relieved at Bangladesh’s qualification.

Mahmudullah said: “The way we want to play was today’s game. We did a very good job to put up a 180-plus score and the bowlers did a really good job.”

Looking towards the next stage the Bangladesh captain added: “The two things we’ve been concerned about are the first six overs with the bat and the ball, if we can get a good start we can capitalise.”

“We just couldn’t execute our death bowling under pressure against a really experienced team,” said Assad Vala, Papua New Guinea’s captain, “[but] there’s a lot of we can take from this [tournament].”