Schools in Samoa closed as storms hit much of South Pacific 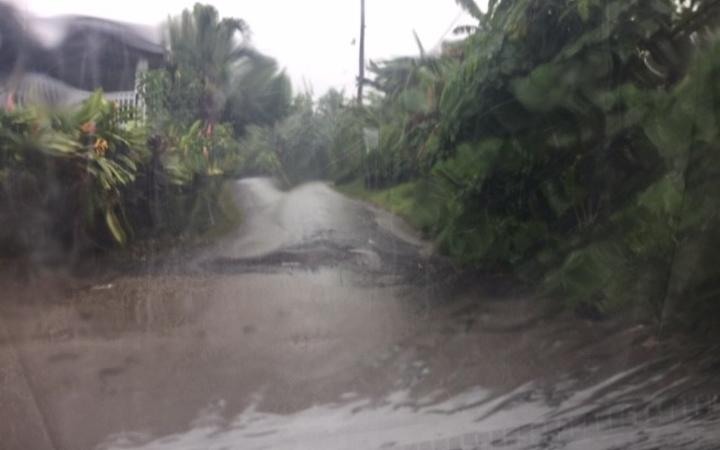 Strong winds and swells as high as four metres are striking the low-lying coutries of Tokelau and Tuvalu, while schools in Samoa and American Samoa have been ordered closed amid heavy rain.

A tropical disturbance is bringing damaging winds and heavy rain to much of the Pacific, prompting warnings in five countries – Samoa, Solomon Islands, Tokelau, Tuvalu and the southern Cook Islands.

Tuvalu is still reeling from Cyclone Tino last month, where heavy swells washed across most of the country’s islands, leaving half the population severely affected.

A forecaster at the Fiji Meteorological Service, Sakeasi Rabitu, said much of the South Pacific could experience damaging weather from a wide band of low-pressure.

“It’s covering the whole area right from the Solomons, through to Tuvalu, Tokelau and right across to the Cooks,” he said. “All a big band of this trough line, trough of low pressure, that are causing these gale winds across these islands.”

Government schools in Samoa have been ordered closed on Tuesday and Wednesday as the country hunkers down for the tropical storm.

More than 130mm of rain had already fallen in Samoa by Monday night, forecasters said, which had brought flooding to parts of Apia and nearby villages and caused some rivers to burst their banks.

Storm warnings are in force for both Samoa and American Samoa, with the islands sandwiched between two tropical disturbances, and beneath a broad low pressure system.

In American Samoa, winds as high as 111km/h have been recorded and hundreds of families remain without power, after lines were damaged by strong winds.

Ferry sailings have been cancelled and flights have either been delayed or cancelled.

Authorities in both Samoas are warning of possible flooding, landslides and damage caused by strong winds.

American Samoa’s governor has ordered that all public schools be closed for the next two days due to the bad weather.

While a complete assessment of schools has not yet been carried out, the Director of Education said many school grounds were soaked and campuses were covered in debris.

Dr Ruth Matagi Tofiga said some schools were also being used as temporary shelters for about 100 people.

Elinor Lutu McMoore, from the National Weather Service, said while winds had died down on Tutuila, Manu’a and Swains continued to experience damaging winds.

At least three weather systems in the area have the potential of combining into a serious storm.