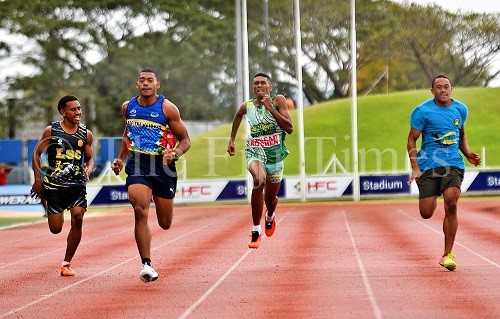 The 2022 Coca-Cola Games is expected to unveil a lot of potential athletes from schools outside Viti Levu.

With the return of the games this week after a lapse of two years, school teachers from the Coca-Cola Games Maritime Zone are adamant their athletes will provide good competition and threats to athletes from prominent schools around Suva, Tailevu and the West.

Speaking during the Maritime Zone competition at the HFC Bank Stadium yesterday, Ratu Finau Secondary School PEMAC head of department Viliame Katina said their athletes had been preparing well before sailing to Suva.

“The athletes had been preparing well on the island and had spent a few days here at the HFC Bank Stadium tracks,” said Katina.

“We had conducted our school inter-house competition where the best athletes were chosen who had the closest times, throws and jumps to the national records.

“Most of the athletes in the track events clocked times that were a few seconds close to the records and we had groomed them over the weeks in trying to improve their times.

“We have two athletes clocking 11 seconds in the 100 metres and that is the time recorded when they are running at the school ground.

“We are hoping they would clock good times at the games since they will be running on the tracks.”

The team manager of Rotuma High School, Nemani Rakadi, shared the same sentiments saying they hope to take a few medals back to the island.

“We are fielding six athletes at this year’s Coca-Cola Games and we are hoping of taking a medal back to the islands,” said Rakadi.

“These athletes have the potential of upsetting some prominent schools in Fiji, so if the athletes do well and perform, the results would surely fall in our favour.”

The Coca-Cola Games begin tomorrow until Saturday at the HFC Bank Stadium in Suva.