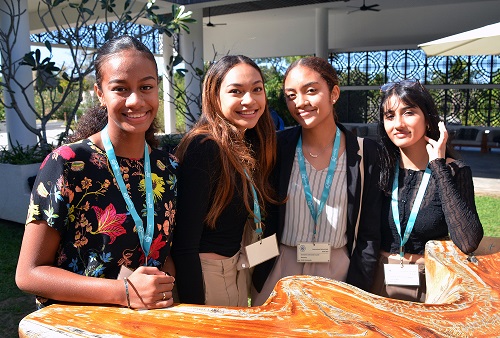 Seven schools in the Western Division are learning more about the United Nations General Assembly through a Model UN Council (MUN) meeting at the Fiji Marriott Resort Momi Bay.

MUN co-secretary general Federica Dressino said this was the second MUN meeting to be held for schools in the Western Division.

“In a sense, it provides you with a great variety of skills which is basically the core of it,” she said.

“It is about politics and it is about international affairs but in the end, it’s so much more than that. It is an opportunity and a platform for students to discover what they are passionate about through the different agendas that we have.

“For example, we have the Commission on the Status of Women which is a council that focuses specifically on women’s rights and how they are related to international issues that we have.”

Co-secretary general Lily Hopf said one of the agendas was addressing domestic violence toward women and addressing the lack of access to health care for indigenous women.

“Both of these agendas are very important to Fiji and the Pacific because these are issues that we can identify all over the world including here,” she said.

“It’s important for all of the schools to basically participate in this because then students can find out what they are passionate about.”

Swami Vivekananda College (SVC) headgirl Zu Fen Liu said the MUN provided an opportunity for students to adopt skill sets that could help them in their career paths.

“I think it’s very useful for every student because not only are we discussing these important issues affecting our global community, each student is also learning how to be good public speakers, researchers and also be more aware of our global issues,” she said.