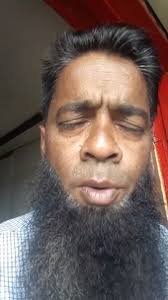 Ms Akbar confirmed to this newspaper that the decision to suspend the teacher was made at mid-day today.

He has been suspended with full pay pending investigation.